Donors at Center for Visual and Performing Arts donate 195 units

MUNSTER, Ind. (January 15, 2020) – The American Red Cross was hoping to get 100 blood donor appointments at the Center for Visual and Performing Arts, Indiana, location. Since donations are typically low in January, and the Munster location was a new addition to the event, they weren’t sure what to expect.

By 7:00am today, they had booked 184 appointments, and the wait time for walk-ins was up to two-and-a-half hours.

“We are so proud and so pleased,” Phil Potempa told ABC7’s Greg Dutra about hosting the Great Chicago Blood Drive. Potempa is Marketing Director of the Center, and he appreciated the opportunity to serve the community while also letting people know about the variety of events and programs the Center offers.

A hint of Buddy

One of those programs is happening this Saturday, January 18—Zachary Stevenson will perform “A Tribute to Buddy Holly” on the Main Stage at the Center. Stevenson spent some time at the blood drive singing to donors, though the phlebotomists’ safety concerns and the bustle of broadcast activity made it difficult to offer more than a hint of the real performance.

After being ushered to the side by a woman in scrubs who expressed concern about “splatter,” Stevenson complied, admitting as an aside, “I gotta say, I’ve never been in a performance scenario where blood splatter was a possibility.”

Stevenson had to tone down his performance for the live broadcast while ABC7’s Greg Dutra interviewed Phil Potempa, Marketing Director for the Center for Visual and Performing Arts in Munster, Indiana.

Stevenson’s presence was an added bonus for today’s blood donors, most of whom decided to donate because the location was convenient and they understood the need for a healthy blood supply. Each day, the Red Cross needs about 13,000 blood donations for patients at approximately 2,500 hospitals across the country.

Kristin Marlow-Kellemen is the Executive Director of the Northwest Indiana Chapter of the American Red Cross. She explained that the blood supply is particularly vulnerable during winter months—flu season impacts donor eligibility; holidays affect donor availability; and weather impacts donors’ willingness or ability to travel to donation centers. In addition, many regular donors are senior citizens who developed the habit during an era when blood donations were considered a natural way to give back to the community. Though seniors are faithful blood donors, some spend winters away from home, and they are less likely to follow their regular giving schedule there. All of these factors, and an increased need for blood during winter months, bring blood supplies to critical levels at this time of year.

At 5:20pm, ABC7 reported that they had exceeded their overall donation goal, reaching 1,530 units from all four blood drive locations—the Merchandise Mart in Chicago, the Drake Hotel in Oak Brook, the Sullivan Community Center in Vernon Hills, and the Center for Visual and Performing Arts in Munster, Indiana. An 8:43pm email from Lauren Hames added this detail from Munster: “We finished the day with 195 units collected from just that station!” And the 10:00pm ABC7 broadcast shared the final total—a record-breaking 1,866 units.

Stevenson hung around after the broadcast to answer questions about his shows on Saturday, January 18. On the Main Stage he will perform not only the familiar Buddy Holly tunes, but also “some B sides and rarities.” Stevenson has put together a program that explores some of the pivotal points in Holly’s life and music, and he loves it when audiences participate by singing and even dancing along.

“It’s more than just a concert; there’s some history to it,” said Stevenson. “I’ve kind of honed this concert over many years—at first I just did the songs, but now I’ve developed this whole show that I’m really proud of.”

Theatre at the Center is located within the Center for Visual and Performing Arts, at 1040 Ridge Road in Munster, Indiana. It is an accessible venue with free parking available on site. 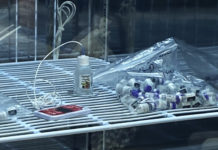