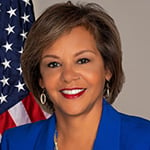 information provided by the Office of Congresswoman Kelly

“Each year, Congress comes together to enact the National Defense Authorization Act, referred to as the NDAA. The bill provides Congress with an annual opportunity to review and shift vital investments in our Armed Forces, national security and economic security. With complex threats emerging around the globe, the importance of this measure and the bipartisan process used to achieve it only grows.

“This bill provides our Armed Forces with the necessary authority and investments to maintain American military superiority while innovating for an unknown and more challenging future.

“Additionally, this NDAA expands paid paternal leave to 12 weeks for servicemembers and federal government employees. This pro-military and pro-worker provision is a critical step forward as we continue working to ensure that all families have access to paid paternal leave when starting or growing their families.

“Striking a reasonable balance between security and American jobs, the provisions related to rolling stock procurement limitations have been amended in this conference report to reduce the impact on U.S. manufacturing. The NDAA will not impact existing contracts, and the bill provides a two-year window for necessary firm restructuring to address concerns regarding the involvement of the government of the People’s Republic of China.

“On the personnel level, the NDAA repeals the ‘widows’ tax’ created by the largely unpopular GOP Tax Scam. The tax scam, known for giving more than 80 percent of its benefits to the richest handful of American families, included an insidious provision that taxed the benefits of Gold Star Families at the estate rate, as high as 37 percent in some cases.

“No bill is perfect; there is a give and take. I believe that House Democrats held the line and won major victories for our Armed Forces, workers, families and nation in passing this bill.

“This measure is the best achievable alternative for our servicemembers and their families. I’m proud to support it. Our brave men and women in uniform stand to benefit from these strategic investments in our national security and Armed Forces.”