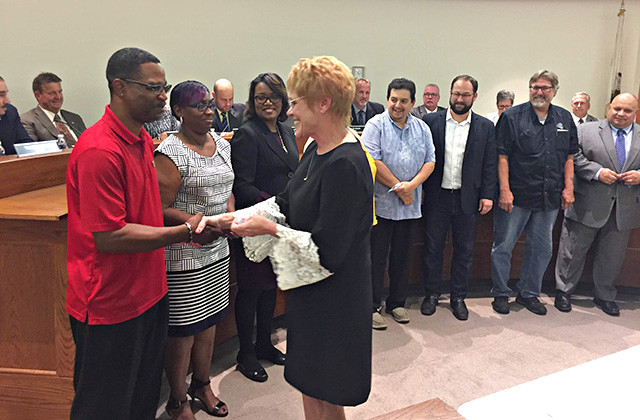 LANSING, Ill. (November 30, 2019) – In August of 2017, a community meeting was held to address police and community relations in Lansing. This meeting was a response to an incident involving a white off-duty police officer and a black teenager that occurred in June 2017. Forming a Human Relations Commission was one of many actions recommended at the meeting, and it was an action that Mayor Patty Eidam promised to address immediately, in keeping with the platform she had campaigned on prior to taking office.

On September 18, 2018 Mayor Eidam introduced the members of her newly-formed Lansing Human Relations Commission, ending a long process of planning, interviewing, and decision-making by the Village of Lansing. About a month later, the Commission met for the first time at the Lansing Police Department to establish its mission and goals, and to receive training on intercultural communication. On December 20 of last year, the Commission held its first meeting at the Lansing Public Library, where it has met nearly every third Thursday of the month since.

As Lansing arrives at the one-year anniversary of the Human Relations Commission (HRC), it is worthwhile to look back on the inaugural year of the highly-anticipated Commission and observe what it has accomplished, what challenges it has encountered, and what the plans are for its future.

In its first meeting, the HRC shared its mission, which is “to promote inclusion to the Village administration on community-related issues. The Commission is responsible for designing and recommending innovative programs to enhance community involvement among all Lansing entities in order to increase cultural competency and improve intergroup relations.”

The Commission also has three goals:

This mission and these goals were not established by Commissioners, but given to the HRC to uphold and abide by.

In general, the HRC has made a point to become a familiar presence in Lansing throughout the last year. In late spring they decided on gray polo shirts with the Village logo to identify themselves as HRC Commissioners at Lansing events. They walked the parade route at the Good Neighbor Day Parade and handed out Frisbees. They surveyed residents during one of the Cruise Nights this summer, asking questions about the HRC and its mission in Lansing. They set up a table at the Lansing Area Chamber’s Business Expo and introduced themselves to members of the business community.

At their monthly meetings, a number of ideas have been discussed about events and programs the HRC could host, but no specific plans were made throughout 2019.

Lansing’s Human Relations Commissioners have learned the procedural and governmental trappings that come with being a public body. For example, because the HRC is a public entity, it abides by Robert’s Rules of Order, requiring agendas, motions, seconds, and other specific means by which to accomplish tasks. For a Commission tasked with enhancing cultural relations, this style of meeting can feel restrictive.

Additionally, the Commission is bound by the Open Meetings Act (OMA), which sets boundaries for what kind of communication can occur outside of a public meeting. Commissioner Rich Schaeffer feels that the OMA limits some of the interpersonal interactions that he’d like to have with his fellow Commissioners: “It takes the wind out of the sails is what it does—for getting to know all of the people that you could possibly know.”

Another challenge facing the Human Relations Commission has been how to put its mission and goals into practice. The Commissioners have come up with plenty of good ideas—and have received ideas from the Lansing community—but implementation has been a struggle.

“Movement on things we should do has been slow,” Commissioner Micaela Smith said. To help explain this initial lethargy, Smith likens the HRC to a contestant on the popular show Shark Tank. In the same way that business entrepreneurs on the show have to figure out how to best produce, market, and sell their product, the Commissioners have a similar task.

“That’s what we are, like a Shark Tank for a product. We’re not really a business and we don’t have a service, but we’re developing how is this going to work and what does it look like,” Smith said.

The slow start has been especially challenging given the initial excitement surrounding the Commission. Public involvement in meetings has dwindled, and meetings often comprise fewer than all nine Commissioners.

“[In general, people] are always eager for something at the start of it,” Smith said. “Something new, something different, [people say], ‘Wow, what is this going to be like?’ And then in the background and underneath all of that, it’s just like starting your own business or company—it takes a while to complete a whole vision.”

The question of whether or not the HRC’s first year has been successful is perhaps best answered by another question: By what standard should the Commission’s success be measured? Lansing has never had a Human Relations Commission before, and even in the wider cultural context, the idea of such a Commission is relatively new, making the process of judging the HRC’s first year difficult.

The Commission has adopted its mission and goals, attended numerous events, created a survey, generated ideas for events, gotten to know each other, and established a somewhat clearer vision of what they’ve been tasked with doing.

The Commission has not, however, hosted any events or facilitated any significant discussions for the public, and it is still relatively unknown throughout Lansing.

“What are the expectations?” mused Schaeffer. “People who aren’t involved in things have higher expectations than the people that are in them because it’s easy to criticize from the sidelines,” he said.

“[Whether or not the HRC has been successful] is a hard question because what are we measuring? Based on what?…We haven’t had anything to measure as a failure or it didn’t work,” said Smith.

She went on to say that some in Lansing might perceive the HRC as not having accomplished much: “What the residents expected or thought of has not been done,” she said. “What they thought was supposed to be an action-type committee, to do things, to address things, to have [events], it didn’t happen for them. So I can see how some residents may be like, ‘Oh, they’re not doing anything.’”

Given that the success of the Human Relations Commission’s first year is difficult to measure, the Commissioners’ only option is to build on the year’s positives, learn from its challenges, and move into 2020 better equipped than they were when they entered 2019.

At their November 21 meeting—the last of 2019—the HRC focused especially on what projects they can bring to life in 2020. One idea was to partner with the Complete Count Committee to help inform Lansing residents about Census 2020. Commissioner Darvel Stinson is on the Complete Count Committee, and he explained to the HRC that there are opportunities to inform and educate the public on exactly what the census is, why it’s important, and how to participate. The HRC discussed the possibility of hosting a town hall-type event to make the most of these opportunities.

In addition, Commissioner Bolz suggested that the HRC might take 15 minutes each meeting to discuss a significant topic or open-ended question related to the mission and goals of the Commission. After some discussion on the idea, the Commission resolved to try it out at their January meeting by talking about generational issues. Bolz also mentioned that it might serve to attract more interest in the Commission if the Commissioners were engaged in relevant, meaningful discussions on a regular basis.

Commissioner Smith is excited to see an HRC website come to life, which the Commission has been working on for awhile with the Village Administration. It was announced during the November 21 meeting that the website domain will be lansinghrc.org, though the site is not yet live. Smith also feels that developing an email list is an important step for the HRC to take toward better communication with the public. She hopes that by this time next year, more people will be interested in the HRC and will attend its meetings again.

Bolz expressed a similar sentiment: “I would love to have seen a growing attendance for our meetings, where we’re having discussions. I would love to see at least two or three events where either a speaker is brought in or we’re discussing topics that matter to residents…. I think the major goal for our Commission should be to create spaces where people can come together and feel safe and encouraged to want to talk about things that not just bother them or are hard, but to build relationships.”

It was in November of last year that Chairman Leo Valencia said the following to his fellow Commissioners at the HRC’s first meeting: “You saw an opportunity to make a difference [by joining this Commission], a difference in people’s lives. Our fellow brothers and sisters need our help, right? How are we going to fix it? I have no idea. But we’re going to try, and we’re going to get it done.”

A year later the same sentiment holds true, though perhaps there’s a better awareness among all involved of how difficult the mission and goals of the Commission are to achieve.

Lansing’s Human Relations Commissioners are Michael Bolz, David Iwaszko, Jamica Quillin, Rich Schaeffer, Micaela Smith, Darvel Stinson, Regina Titsworth, Leo Valencia (Chair), and Bobb Wright. They meet every third Thursday of the month (though not this December) in the lower level of the Lansing Public Library, 2750 Indiana Avenue. The next meeting is scheduled for January 16 at 6:30pm.