LANSING, Ill. (November 26, 2019) – On November 16, the Chicago Midwest Region Emmy Awards were held at the Swissotel in Chicago and one of five nominees in the “Outstanding Achievement for Commercials – Single Spot” category was a promotional video for the Emirates Formula One Chicago Festival. That commercial was created by a team from Intersport, and the team included Patrick Gulotta of Lansing, the Vice President of Technical Operations.

A media and marketing firm, Intersport was tasked with making a commercial to build excitement about the F1 Chicago Festival this past June. Their commercial highlights Soldier Field (the festival venue), opening with an aerial shot of the stadium and the Chicago skyline behind it. A car races into the stadium and onto the field, and Chicago Bears’ quarterback Mitch Trubisky makes an appearance.

It’s not really Trubisky behind the wheel, but Gulotta and the production team made it look like it was. They worked with a stunt team to execute the realistic-looking 56-second spot.


Gulotta served as executive producer and oversaw a crew of about 50, coordinating with the stunt crew and working with the producing and directing staff.


“It was a team win,” he said. “From day one in securing the job with Formula One, then execution, producing the event commercial, and editing, it was a massive team effort. This doesn’t happen without a great team.”

Intersport beat out two Chicago Cubs commercials, one from Notre Dame’s Fighting Irish Media, and one from a hospital. According to Gulotta, the commercial was made to create more brand awareness of the Formula One racing circuit. “Formula One is very big in European markets and across the globe,” he said. “They’re trying to build up a larger fan base in the United States.” The F1 festivals, which have also been held in Los Angeles and Miami, are one way the racing league is widening their audience.

Gulotta has been in the television industry for about 29 years and has worked for Intersport for the past 12 years. He said that it was such a special honor because the awards are voted on by people of the broadcast community. “It’s really nice to be recognized, especially when its voted on by fellow peers in the industry,” said Gulotta.

The Emmy is on display at Intersport’s office, and individual team members had an opportunity to purchase one of their own. Gulotta was one of four from his company to attend the awards ceremony. Attending with him were Owen Weber, Scott Baker, and Hunter Bradley.

To view the commercial, visit youtube.com/watch?v=c-aAnrXodQg. 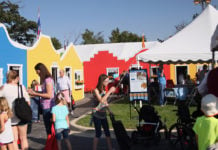