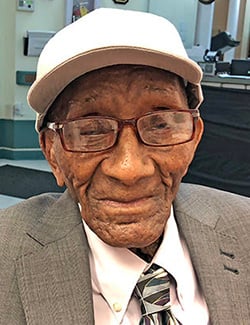 He was born to John and Mattie Crawford on August 25, 1907. His mother died when he was an infant, and he knew her only from stories told by his family. Named after a traveling Southern preacher, CP was his actual name, not his initials.

CP’s immediate family included three older brothers and two older sisters. All siblings were separated after their mother died and were raised by aunts and uncles. CP was not allowed to attend school, so around age 4 he started working in the fields picking cotton, plowing corn, and manning the gardens. Around the age of 13, he got his first job working at a cafe washing dishes. He worked at Southland Oil Refinery for a while, then went on to work at Illinois Central Railroad, which brought him to Chicago.

CP was married three times and had six foster children, but never had any biological children. Prior to moving to Tri-State Nursing and Rehabilitation Center (2500 175th Street, Lansing, Illinois) in 2012, CP had been living alone.

As a Lansing resident over the age of 100, CP was visited by Mayor Patty Eidam and other Village officials three times—to celebrate his 110th, 111th, and, this year, 112th birthday. At his 112th celebration he mentioned that he was a White Sox fan but had never seen a game at Guaranteed Rate Field, and arrangements were made with the White Sox organization to honor him at a game. CP was chauffeured to the September 12 game in a limo, greeted by Hall-of-Famer Harold Baines, taken to the Guaranteed Rate Club for birthday cake, recognized on the scoreboard, and allowed to enjoy the game. When a nearby fan caught a foul ball, he passed it back to CP, who smiled and shook his head.

“I’ve been around and I have met some wonderful people,” said CP at the game. “I’m happy to be here.”

CP Crawford was well known for his simple secret to long life: “Mind your own business.”

Funeral arrangements are being handled by Gatling’s Chapel (1200 E 162nd Street, South Holland, Illinois). Visitation will be held from 2:00–7:00pm, Saturday, November 30. The funeral will be held at Gatling’s at 3:00pm on Sunday, December 1.