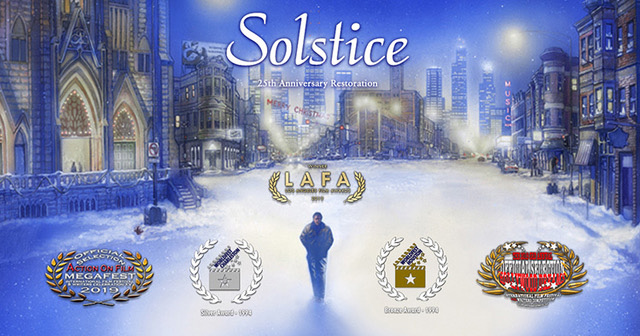 CHICAGO, Ill. (November 20, 2019) – In 1994, Jerry Vasilatos began his journey as an independent filmmaker with a dream to make a Christmas movie, going from script to screen with Solstice, a Chicago Christmas story that was broadcast into millions of households as Lifetime Television’s Original World Premiere Movie in 1994.

On November 27, 2019, the 25th Anniversary Restoration of Solstice will be released on Amazon Prime with the Blu-ray following on December 15. The Limited Edition Blu-ray release, featuring 140 minutes of bonus content—including newly produced behind the scenes programs, commentary tracks, and foreign subtitling in French, German, Greek, Russian, and Spanish—is available for pre-order on Indiegogo at: www.solsticebluray.com.

“Solstice deals with personal seasonal introspections as relevant today as they were 25 years ago,” said Vasilatos. “I hope the message of the story helps provide some hope and comfort to audiences during their own reflections on what the holidays should be about.”

The film was restored after scanning the original camera negative in 2K, and the sound mix was recreated from the original reel-to-reel elements. Composer Balint Sapszon created a new score recorded by the Budapest Scoring Orchestra. “The film looks and sounds better now than when it was originally released,” said Vasilatos. “The limited edition Blu-Ray makes a great stocking stuffer for viewing with family and friends.”

Set in frigid, mid-winter Chicago, Solstice tells the story of Nick (played by Michael Kelley, creator of ABC’s “Revenge,” in his earlier acting days), a disillusioned young man who encounters a variety of characters who help him regain a sense of hope and optimism during a lonely Christmas Eve. The character and the story draw from Vasilatos’s own experiences and emotional struggles at the time. Vasilatos produced the film using money from a personal injury settlement he received after losing his leg in a traumatic subway injury. He used the opportunity to reframe his life and tell a story of redemption and second chances.

Vasilatos is also the inventor of a device that enhances mobility for amputees and other cane and crutch users. The EZ-Walk Cane & Crutch Pad is a lightweight, flexible rubber disc that fastens to traditional cane and crutch stems, allowing users to navigate uneven terrain. Vasilatos’ EZ-Walk was nominated for a 2019 Chicago Innovation Award.

The 25th Anniversary Edition Blu-Ray of Solstice, along with other perks—including the award-winning score on CD, DVDs, and film poster—are all available on Indiegogo at: www.solsticebluray.com.