LANSING, Ill. (November 2019) – November is a time for remembering our nation’s veterans—November 10 is the Marine Corps birthday, and November 11 is Veterans Day (originally Armistice Day). And Lansing’s annual Veterans Day Service on November 10 at 2:00pm will give us an opportunity to recognize our local heroes with special ceremony at the Lansing Veterans Memorial.

Those traditions take on extra layers of meaning when the people honored are more than just names engraved in granite. In preparation for Veterans Day, I’d like to share the story of three Lansing veterans who served their country and our community.

The story begins back in the 1990s. John Aylmer, Ryan Hensley, and Philip Martini are sons of Lansing. Aylmer and Hensley are the same age and attend St. Ann CCD together. Martini is three years older, but he and Aylmer are neighbors. With Aylmer as a connection, Hensley and Martini get to know each other, and soon the three become best friends. Even today their families can recall countless stories of them doing the things boys do living life in Lansing.

Martini graduates from TF South in 2000. Aylmer and Hensley graduate in 2003, and all three enlist in the Marine Corps. The three friends attend bootcamp together in San Diego in 2003, but they are split up into different platoons. They occasionally see one another during training evolutions, and they communicate with a nod of the head or quick eye contact. All three know that the Marine Corps is not interested in allowing recruits to socialize—they are being prepared for the deadly serious war in Iraq. Drill instructors remind them constantly of the legacy of Marines who have fought before them, a legacy that demands solemn respect.

It is November 2003 when Aylmer, Hensley, and Martini all graduate from bootcamp as Marines. Their families come to San Diego for the graduation ceremony. While Marine graduation is an occasion marked with joy and pride, the celebration is shadowed with the awareness of what these new Marines are graduating into—our nation’s war in Iraq.

Split up again, the young men from Lansing manage to stay in contact via cell phones. Aylmer’s and Martini’s units are both stationed at Camp Pendleton, California, so they occasionally get together socially. But Hensley is 136 miles away at Marine Corps Base Twentynine Palms. Due to operational tempo, training for upcoming deployments to Iraq, and the lack of a car, the only time all three friends are together is Christmas leave in 2005.

In 2006, all three Marines are in multiple places conducting operations, but at some point they all end up in or around Al Anbar Province, Iraq, participating in Operation Phantom Fury—the second battle for Fallujah. Aylmer had fought in the first battle of Fallujah in 2004, and in 2006 he is on his second deployment to Iraq. His battalion—the 3/5—is running patrols and combat operations out of Camp Fallujah and spending a lot of time in Abu Ghraib. Hensley and the 1/7 are to the northeast near the Syrian border. Martini and the 1/1 are in Karma.

On April 8, 2006, Philip Martini is killed in action while on patrol.

Martini’s family is notified, and the news begins to travel through Lansing. A Chicago Tribune news article describes the fallen hero as “popular and loved,” and the community is stunned by the loss. Back in Fallujah, when Aylmer returns to camp from an operation to Abu Ghraib, he makes a call home on a satellite phone. His dad answers and is the one to let his son know that his friend has made the ultimate sacrifice.

Aylmer recalls that while he was in Abu Ghraib he witnessed an intense firefight in the vicinity of Karma, but at the time he wasn’t aware that his childhood friend, Phil Martini, was conducting combat operations just to the north of him.

Aylmer tells his dad to send a Red Cross message, which is an emergency communications service the Red Cross provides to military families. He wants to give his family something specific to do, and he hopes this message will provide a way for him to attend Martini’s funeral, though he knows this is not likely.

Around the same time, Hensley makes a phone call home to his family in Lansing from his location a little further northeast on the Syrian border. Hensley’s family notifies him of Martini’s death.

And just as Aylmer did, Hensley tells his family to send a Red Cross message, hoping in some way to be able to honor his fallen friend.

The Red Cross messages set off a chain of events. Each Marine’s command is notified of Martini’s death and learns of the three Marines’ history of enlisting together. Aylmer’s unit commander authorizes and encourages him to attend Martini’s memorial service at Camp Fallujah. Because Aylmer is already in Abu Ghraib, he only needs to catch a convoy ride back to the camp and link up with 1/1. He finds 1/1’s command post, but Martini’s unit is out on patrol, so Aylmer has to wait for their return. It is night, so he settles in to get some sleep.

Meanwhile, Hensley has also begun his trek to Camp Fallujah for the memorial service. In contrast with Aylmer’s straightforward convoy, Hensley has to cobble together wheeled vehicles and helicopter rides. Al Anbar is an active combat zone at that time, and utilizing military assets for non-combat operations is a challenge. After a long night’s travel, a disheveled Hensley walks into 1/1 command post at Camp Fallujah to find his friend Aylmer waiting in the same place.

For the first time since their 2005 Christmas leave in Lansing, the friends are together again—this time awaiting the 1/1’s return from combat operations. When 1/1 returns that evening, Aylmer and Hensley are able to meet Martini’s Marine brothers.

The next day a makeshift altar draped in white is prepared, and Martini’s photograph is placed upon it. Near the altar, Martini’s rifle with a fixed bayonet is stuck into the ground, bayonet first. Martini’s helmet is placed on top of the rifle. His boots are placed at the position of attention at the base of the rifle. The American and Marine Corps flags are crossed behind it to form a memorial backdrop.

Martini’s unit gathers near the display for roll call. Names of Marines are called out, and they respond one by one, yelling, “Here First Sergeant!” Martini’s name is called—and nothing but silence comes from the group.

After roll call the commanding officer speaks about Martini’s military service. Then Martini’s Marine brothers from 1/1 are afforded an opportunity to make remarks on their friend. Finally, Aylmer and Hensley are invited to speak. They tell Martini’s unit about their lifelong friendship dating back to their days in Lansing.

The three friends are only three months into their deployment at the time of Martini’s death. Aylmer and Hensley head back to their units to fight for another four months before reuniting again in Lansing after their deployments to Iraq are complete.

John Aylmer and Ryan Hensley remain close friends and are active in the Lansing community today. They have dedicated their lives to keeping Philip Martini’s name and memory alive.

Philip Martini is memorialized at the Lansing Veterans Memorial, which is located at the southeast corner of Burnham Avenue and Glenwood-Lansing Road. The Memorial is open 24/7, so members of the public can visit any time and find his name etched in the polished granite of the memorial wall. 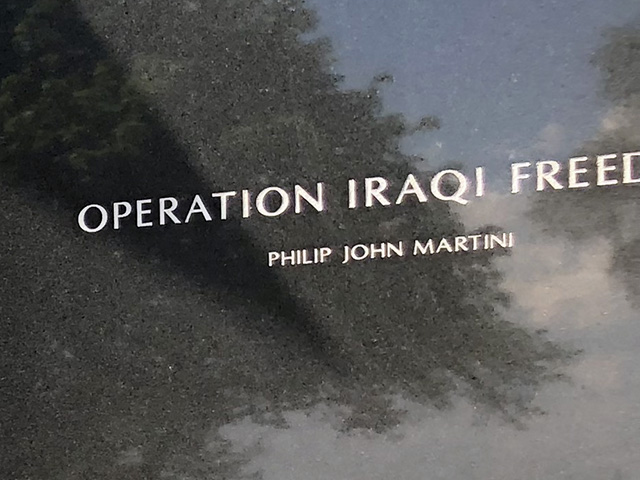