information provided by the Office of Robin Kelly 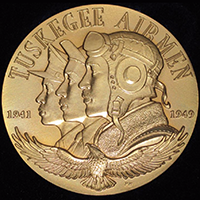 Note: An earlier version of this article incorrectly identified a medal awarded to the Tuskegee Airmen in 2007. The Tuskegee Airmen were awarded a Congressional Gold Medal, which is a civilian award honoring individuals or groups whose performance impacts American history and culture. We apologize for the misinformation.

Because of the anticipated cold weather the ceremony will be held at Olympia Fields Village Hall (20040 Governors Highway) rather than in the Olympia Fields Post Office parking lot.

Captain Martin was a member of the famous World War II Tuskegee Airmen. He served as a combat pilot in the 100th Fighter Squadron of the 332nd Fighter Group. On his 64th mission, he was shot down over German-occupied territory, and he evaded capture for five weeks as he made his way safely across Allied lines. He retired from the U.S. Army in 1945.

Captain Martin’s bravery and service was recognized with several war decorations, including the Distinguished Flying Cross, the Air Medal with Six Oak Leaf Cluster, and the Purple Heart.

In April 2006, the U.S. Congress voted to award the Tuskegee Airmen a Congressional Gold Medal, the most prestigious award Congress can give to civilians. The award was presented to the surviving Tuskegee Airmen—including Captain Robert Martin—on March 29, 2007, at a ceremony in the rotunda of the U.S. Capitol “in recognition of their unique military record, which inspired revolutionary reform in the Armed Forces.” (Source: National Museum of the United States Air Force)

After the war, Captain Martin made his home in Chicago and worked as an electrical engineer. In 2008, he moved to Olympia Fields. He and his wife, Odette Ewell, were married for 68 years and had four children. Captain Martin passed away on July 26, 2018.