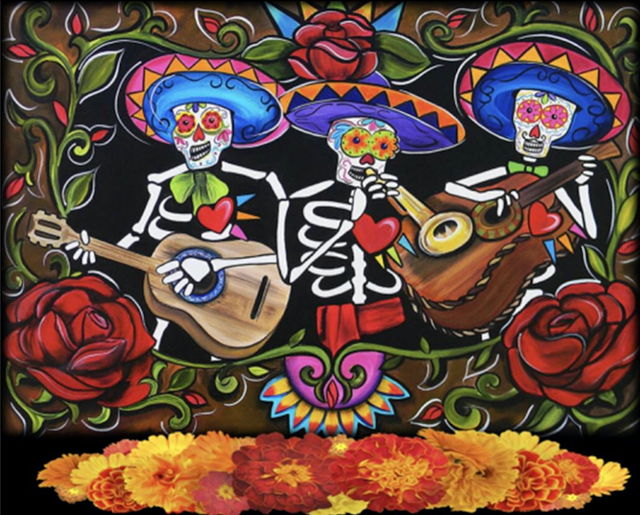 LANSING, Ill. (October 28, 2019) – Students from the TF South Spanish Class, Latin Dance Crew, and Dreamers will host their fifth annual Day of the Dead exhibit on Wednesday, October 30, from 4:00–6:00pm. Admission is free, and food will be available for purchase from Taqueria la Soga.

In Mexico, Dia de los Muertos is a multi-day celebration of family and friends who have died, and a remembrance of their spiritual journey. Originally a summer event, the tradition gradually became associated with the Catholic observance of All Hallow’s Eve (Halloween), All Saints’ Day (November 1), and All Souls’ Day (November 2).

As a way of safeguarding Day of the Dead traditions and affirming their cultural significance, in 2008 UNESCO (United Nations Educational, Scientific, and Cultural Organization) declared Dia de los Muertos part of the Intangible Cultural Heritage of Mexico. Intangible Cultural Heritage includes practices, objects, food, dance, oral history, and other elements of cultural identity that are conveyed from one generation to the next.

The October 30 exhibit at TF South will include a guided tour of the altar, which is central to Day of the Dead traditions, and other activities for the whole family, such as making cempasúchil flowers and papel picado, coloring calaveras (skulls), and an invitation to contribute to a community altar.

TF South is located at 18500 Burnham Avenue in Lansing, Illinois.

Video: Superintendent Jones gets a haircut, and other news from the CTE Showcase