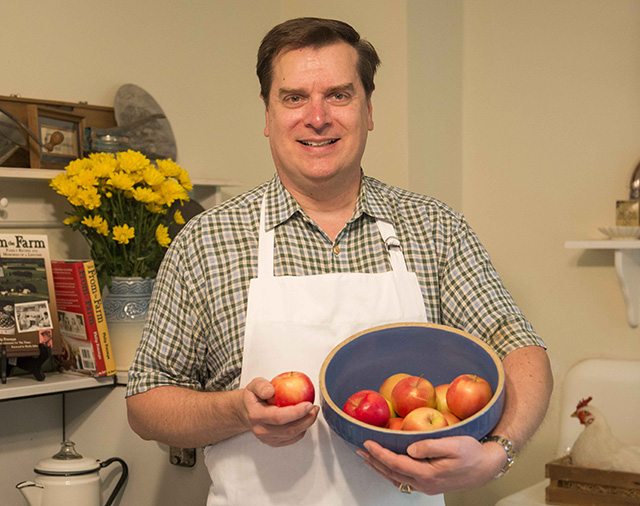 MUNSTER, Ind. (October 22, 2019) – Columnist and Cookbook Author Phil Potempa whips up his latest “From the Farm Cooking Show” at Theatre at the Center in Munster, on Sunday, October 27 at 2:30 pm. The program, which is Theatre at the Center’s fourth edition of Phil’s popular and entertaining stage culinary show, includes a 7-course meal of tried and true recipes, each with its own fascinating story twist and all selected from his fourth published cookbook, Back From the Farm: Family Recipes and Memories of a Lifetime (2019 Pediment Press $34.95). 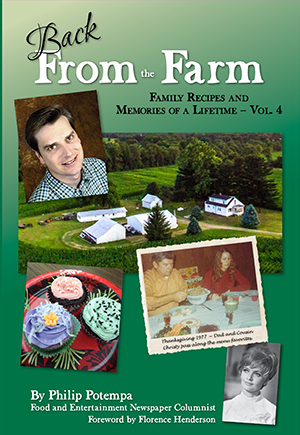 The new cookbook will be released that day with a launch party. The book was written with the help of actress Florence Henderson of TV’s “Brady Bunch” before her passing in November 2016. During the show, all recipes are prepared live in less than two hours with plenty of time for sampling, audience games, and prizes, along with lots of surprises to take home.

Phil sets the stage for celebrating Autumn and Halloween, one of the most popular holidays of the Fall season. “Mrs. Phipp’s Caramel Puffed Corn” is a simple trick for an easy treat to pass out to visiting goblins making the rounds on October 31. He’ll also share the secret ingredient for “Spooky Green Bubbly Punch,” a fun and inviting beverage recipe for thirsty guests of all ages.

Carrots are often called “beginner food” for babies when pureed. However, “Mrs. Kincaid’s Carrot Soup” is the perfect starter course to any elegant 7-course dinner party. This recipe gives a respectful nod to the wild carrots that grow along the fields, woods, and ditches at the Potempa family farm in Indiana. The recipe, included in the new cookbook, is non-dairy as well as lactose- and gluten-free.

Peggy Potempa’s recipe for “Mom’s Stuffed Cabbage Rolls” reflects the family’s Polish heritage and is the perfect entrée to serve as Fall temperatures arrive. And with Thanksgiving just around the corner, Millie Rytel’s Pumpkin Bread provides a farm-frugal recipe that makes use of the extra pumpkin left over after finishing preparations for holiday pies. It’s the perfect easy recipe to whip together quickly and serve when neighbors drop by for afternoon coffee and a chat.

“Regardless of the season, my recipe for Quiche Lorraine is a treasured request,” Potempa says. “With the aroma of sautéed onions, bacon, Gruyere cheese, eggs, cream, and asparagus wafting from the kitchen, it’s a favorite Sunday morning brunch menu highlight that never disappoints.”

Potempa is grateful to Florence Henderson, who writes about her memories of growing up in Indiana in the Foreword to the new cookbook. Henderson was kind enough to also share her keepsake hearty family recipe for “Chicken Oregano.”

Potempa’s show is filled with fun for families and foodies of all ages as he shares stories from his just released Back From the Farm cookbook in between food preparation on stage during the show. In his four published cookbooks, each page chronicles interviews, recipes, and memories from personal and professional experiences. Throughout the years Potempa has interviewed and swapped recipes and stories with Julia Child, Martha Stewart, President Jimmy Carter, Oprah Winfrey, and other favorite luminaries. He is also an adjunct instructor in communications at both Valparaiso University and Purdue University Northwest. Potempa divides his time between his family’s farm in Northwest Indiana and his home in Chicago.

His latest cookbook features more than 500 pages showcasing the kitchen recipes and know-how of himself as well as his famous friends and also the everyday neighbors his readers have gotten to know during the past two decades. Bigger and brimming with even more fun and surprises on every page, it highlights more than 340 irresistible recipes paired with fascinating stories, and 325 rare color and vintage black-and-white photos from the 1930s to today, most never-before-published.

Tickets for the “From the Farm Fall Cooking Show and Book Launch Party” are $30 and $25 for Subscribers and are available at the Theatre at the Center’s Box Office at 1040 Ridge Road in Munster, or by calling 219-839-3255, or online at www.TheatreAtTheCenter.com. Sunday Champagne Brunch tickets can be added for an additional $24 plus tax.