Based on the heartwarming and timeless film, the musical adaptation of Irving Berlin’s White Christmas premiered in St. Louis in 2000 and opened on Broadway in 2008, followed by a national tour. The book is by David Ives and Paul Blake, with music and lyrics by Irving Berlin teamed for the story of veterans Bob Wallace and Phil Davis, who have a successful song-and-dance act following World War II. Drawn to romance, the two follow a duo of beautiful singing sisters en route to their Christmas stage show booked at a Vermont lodge, which just happens to be owned by Bob and Phil’s former army commander. The dazzling score features classic songs like “Blue Skies,” “I Love A Piano,” “How Deep is the Ocean,” and the perennial holiday favorite and title tune “White Christmas.”

Matt Edmonds (Bob) was last seen at TATC as Sparky in Forever Plaid, as L.M. in Pump Boys and Dinettes, and as part of the ensemble in Big River: The Adventures of Huckleberry Finn. He also appeared in It’s A Wonderful Life: Live in Chicago at the American Blues Theatre, Murder for Two at Marriott Lincolnshire, and Death of a Salesman at Redtwist Theatre, a role which earned him a Jeff Nomination for Best Supporting Actor in a Play.

Justin Brill (Phil), was previously seen at TATC in the role of Jimmy Winter in Nice Work If You Can Get It and as Dennis in All Shook Up (a role he also played in the original Broadway production). In recent years, he has appeared as Amos in Chicago and Bert in 42nd Street at the Drury Lane Theatre.

Casiena Raether (Judy) was seen at TATC as Fraulein Kost in Cabaret, and she also appeared at TATC in A Wonderful Life. Previous work includes the role of Cassie in A Chorus Line, the Woman in Sherlock Holmes and The Precarious Position, Jackie in Mauritius, and Ruby in the the Artists’ Ensemble Theatre production of Jeeves Takes a Bow. She also played Belinda in Noises Off and Kitty in The Drowsy Chaperone at the Colorado Springs Fine Arts Center.

Erica Stephan (Betty) last appeared at TATC as Billie Bendix in Nice Work If You Can Get It. Chicago credits include the role of Belle in Beauty and the Beast and the role of Irene in Crazy for You at Drury Lane Theatre. She appeared in Wonderful Town at the Goodman Theatre, as Cosette in Les Miserables at the Paramount Theatre, and in The Little Mermaid at Chicago Shakespeare Theatre.

Neil Friedman was seen at TATC last year as Kris Kringle in Miracle on 34th Street and in A Wonderful Life in 2017. He is a Jeff Award recipient and his Chicago credits include Goodman Theatre, Paramount Theatre, Steppenwolf Theatre, and Chicago Shakespeare Theatre. He most recently appeared in The Adventures of Augie March at Court Theatre and Newsies at Paramount Theatre.

Linda Fortunato is in her fourth season as Theatre at the Center’s Artistic Director, where her most recent credits include directing The Pajama Game. She also directed and choreographed Dames at Sea, Miracle on 34th Street: The Musical, Ghost: The Musical, Steel Magnolias, Big River, The Tin Woman, Cabaret, Annie Warbucks, and A Christmas Story. Fortunato was choreographer for TATC productions such as Spamalot, Big Fish, A Christmas Carol: The Musical, Guys and Dolls, Crazy for You, and Fiddler on the Roof. She has been nominated for five Joseph Jefferson Awards for her work as a choreographer and director, and she received both the Equity and Non-Equity Jeff Awards for Outstanding Choreography in the 2013-14 season, garnering Theatre at the Center’s first award for her choreography of 42nd Street.

Individual ticket prices range from $42–$46. Group discounts are available for groups of 11 or more. Student tickets are $20, and gift certificates are also available. To purchase tickets, call the Box Office at 219-836-3255.

Founded in 1991, the 410-seat Theatre at the Center is a year-round professional theater at its home, the Center for Visual and Performing Arts, 1040 Ridge Road, Munster, Indiana. TATC is an accessible venue with plenty of free parking. For more information, visit www.TheatreAtTheCenter.com. 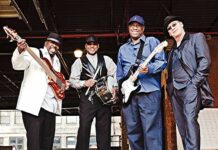 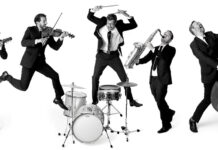