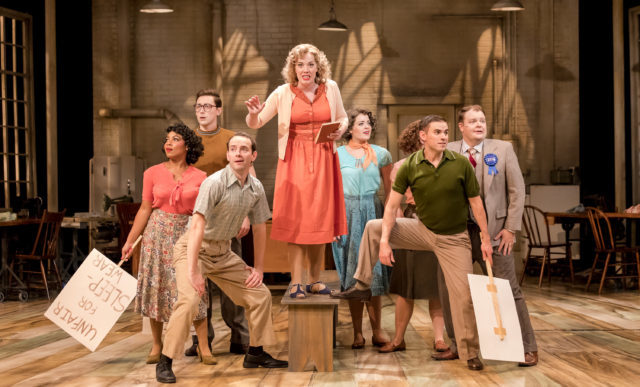 LANSING, Ill. (September 26, 2019) – At the Sleep Tite pajama factory, life isn’t as cozy as you might expect. Babe Williams and with her fellow pajama-producers are fed up with working hard for inadequate pay, and it’s time to do something about it. So begins The Pajama Game, Theatre at the Center’s playful step back in time to examine the tumultuous world of wage negotiations, and—perhaps even more tumultuous—love.

The tangled web of love and labor

Written, set, and first produced in the mid 1950s, The Pajama Game is a witty, musical romp that introduces audiences to a tangled web of all sorts of relationships within the confines of a pajama factory—a web that was perhaps less tangled in 1954 than it seems today.

As the audience learns that Babe (Elizabeth Telford) is the leader of the Union Grievance Committee, it also learns that the handsome newcomer Sid Sorokin (Curtis Bannister) is to be the new factory superintendent. As the two engage in the most obvious—but excellently acted—game of will-they-won’t-they, a second, less obvious question presents itself: how will the laborers be able to secure the 7.5 cent raise they’ve been wanting, and how will that struggle affect the relationships between management and the unionizers?

A 7.5 cent raise is 7.5 cents too much for Mr. Hasler (Steve Silver), the head of the factory, and the resulting conflict drives the plot of the story, though many a pit stop is taken along the way to glance at the smattering of relationships the musical hurls at its audience. In fact, one might say that the pit stops are even more prevalent than the plot: Factory timekeeper Vernon Hines (Jason Grimm) does his best to stay committed to his overtly flirtatious girlfriend Gladys (Kelly Felthous); the head of the laborer’s union Prez (Dan Klarer) is a married man but still interested in any woman that will give him the time of day; and, of course, there’s the swiftly-swinging pendulum that is the relationship between the lead characters.

7.5 cents amidst Babe and Sid

The Pajama Game asks a lot of its audience when it comes to Babe and Sid’s waxing and waning love. If viewers were impressed by Babe’s commitment to rejecting her supervisor’s advances on principle, they’re somewhat surprised when she kisses him at the company picnic. If they were moved by Sid’s undoubtedly naive notion that his love for Babe wouldn’t interfere with his professional relationship with her, they’re left asking “What did you expect?” when Babe instigates a strike and he’s forced to fire her. Their relationship’s ability to seemingly dissolve only to quickly materialize again is what drives the pendulum from one direction back to the other, and the speed at which it does so leaves the audience feeling a bit disoriented.

The musical also asks its audience to be forgiving when it comes to the nominal plot of the story—the demand for a pay increase. After introducing this storyline in the first scenes, The Pajama Game wanders its way through various love interests and other minor storylines before picking up the labor considerations again right before the first act ends. Before getting there, the musical lands at a joyous company picnic, the tone of which rings a bit hollow given the impending slow-down strike.

Nonetheless, this picnic features one of the best group musical numbers of the show—a work-shirking anthem called “Once-a-Year-Day”—and highlights vibrant colors and beautiful choreography, as well as an impressive (and impressively staged) knife-throwing routine from Hines, the timekeeper.

Thankfully, the musical is punctuated by plenty of moments like these that provide a breath of fresh air amidst the relationship drama. One of these moments is “Steam Heat”—one of the more famous songs from the musical that features three shoulder-rolling, bowler hat-wearing dancers amidst a deep red lighting scheme. Another favorite is “Hernando’s Hideaway,” a sultry tango featuring Kelly Felthous as Gladys that takes place in a dimly-lit nightclub.

The vocal performances all around are quite impressive, especially those of the lead duo, Bannister and Telford. Shortly after his first interactions with Telford’s Babe, Bannister’s Sid embarks on a beautiful solo where he records himself singing and then sings along with the playback recording (“Hey There”). It’s a crowd-pleasing moment, as clever as it is beautifully sung. Both Telford and Bannister join to bring the surprisingly upbeat love song “There Once Was a Man” to life, which frames both of their vocal talents in playful and energetic way. The relationship between the two is also quite literally brought to light in subtle ways by the lighting design, which features a blue haze for Sid in his initial malaise and confusion, a pink theme for Babe as she is teased by her coworkers about Sid, and a lively orange and red when the two sing as a couple in love.

Despite its many laudable moments, The Pajama Game asks its audience to make plenty of concessions when it comes to issues of plot and character. Perhaps the show’s biggest culprit in this regard is simply the handful of decades that separate this performance from 1954, a rift that in no way reflects poorly on Theatre at the Center’s production of the musical. Much has changed since then, when audiences were perhaps more content to be entertained by the spectacle of a musical than by its content. The Pajama Game certainly provides spectacle in the form of singing, dancing, and lively characters, but most modern audiences are asking for more. Today’s musical needs an extra layer (or two) of character and plot development that The Pajama Game just doesn’t offer.

Ultimately, The Pajama Game bites off more complexity than two-hours-and-change can chew, and stewards its audience around the horn to so many different characters and sub-stories that it’s hard to keep them all straight. That said, it’s still a fun show to watch, filled with many delightful acting, dancing, and singing moments. Audiences entering the theatre hoping to be entertained by such moments will leave the theatre satisfied, while those hoping to go further and engage with real characters and real issues may leave wanting more.

The show runs through October 13. Performances are:

Individual ticket prices range from $42–$46. To purchase individual tickets, call the Box Office at 219-836-3255. Group discounts are available for groups of 11 or more. Student tickets are $20 and gift certificates are also available.