MUNSTER, Ind. (September 26, 2019) – On October 3, Munster’s Theatre at the Center will host “The Pajama Jam,” a unique dinner theatre event in conjunction with their current on-stage production, The Pajama Game. Jackie Protsman, owner of Lansing’s Fashionette clothing store, will be on-site to sell Fashionette pajamas to theatre-goers. Jackie will have pajamas in sizes ranging from Small to 3X for $20 each, cash only. No tax will be charged on the pajamas.

Protsman is prepared for the event, having already sorted all of her pajamas by size into labeled boxes. Most of the available pajamas are sets, with pants and a top included, which Protsman described as “pretty cute.” However, it is important to note that Pajama Jam customers will not be able to remove the sets from their bags, as it may create too much disorganization at the Fashionette table.

“It’s just another girl and myself [selling the pajamas]. No change, no nothing. $20. It makes it easy. And they’re certainly worth that much,” Protsman said.

The pajama sets are made in the USA, a fact that Protsman is proud of. She says she doesn’t see that much anymore. She is looking forward to visiting the theatre and selling her products.

“I think it’s going to be fun!” Protsman said.

The October 3 event will begin at 5:00pm and the evening’s performance of The Pajama Game will begin at 7:30pm. Tickets for the dinner theatre combo are $55, plus tax, and can be purchased on the theatre’s website at www.theatreatthecenter.com or by calling their box office at 219-836-3255.

The Pajama Game is a Tony award-winning musical inspired by the Doris Day film of the same name. Trouble arises at the Sleep-Tite pajama factory when workers demand a 7½ cent raise. Both sides are standing firm, but when the head of the Union Grievance Committee meets her new supervisor, love changes the game. The Pajama Game features favorites such as “Steam Heat,” “Hernando’s Hideaway,” and “Hey, There.”
The Pajama Game stars Curtis Bannister as Sid, who makes his TATC debut, and Elizabeth Telford as Babe, who previously starred in the Theatre at the Center’s production of Annie Warbucks. The Pajama Game runs until October 13.

Theatre at the Center is located at 1040 Ridge Road in Munster, Indiana. 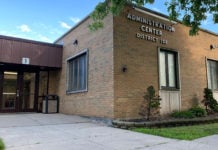 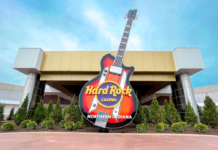