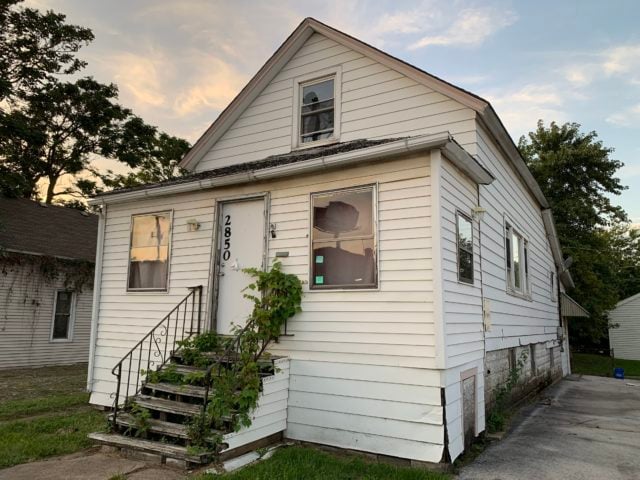 LANSING, Ill. (September 18, 2019) – The Village Board of Trustees approved a resolution to open up bidding for the demolition of nine residential properties in Lansing during its September 17 meeting, a project funded by two grants from the Illinois Housing Development Authority.

As explained by Village Building Commissioner Zoran Savic during the Sept. 3 Village Board Committee of the Whole Meeting, the properties in question are in various states of disrepair and have been eyesores in the Village for some time, suffering from broken windows, sagging roofs and gutters, and extensive water damage. Some of the nine properties have served as a temporary home for squatters as well, and require the occasional attention of the Lansing Police Department. The Lansing Public Works Department also provides lawn-mowing services to a number of the properties.

Below are the properties the Village has obtained or hopes to attain:

Obtained from the land bank:

The final structure at 17144 Burnham Ave has already been demolished because it was classified as an emergency and in danger of immediate collapse.

The Village anticipates that the funding for these demolitions will be fully covered by grants from the Illinois Housing Development Authority (IHDA) through its Abandoned Property Program. The Village was granted $250,000 by the program in 2018 and another $250,000 in 2019. Current Fire Chief Chad Kooyenga played a large role in securing the funds from the IHDA, and was thanked for his efforts by both Savic and Village Trustee Brian Hardy.

During the Sept. 3 Committee of the Whole Meeting, Trustee Maureen Grady-Perovich asked whether or not these demolitions would be completed by the end of the year. Savic responded that he hoped so, and anticipated that the deeds that are still needed should come fairly quickly. He said, “I would like to say I can have these down before snowfall but as you see we’ve got nine of them and there’s a lot more work to do before we can get them down.”

Savic also mentioned the possibility of rehabilitating some of the houses, though he did not mention which homes might be salvageable.

The Village will package all of the demolition projects into one bid in an effort to get a better price, according to Village Administrator Dan Podgorski. By approving the bidding process, the Village is affirming the need to demolish these properties and is authorizing Village staff to contact various companies to find the best and most competitive price to demolish the homes. The estimates that these companies will provide Village officials are called “bids.” In a future meeting, the Village Board will vote to approve a bid for the demolition work.

The Village Board of Trustees holds it meetings on the first and third Tuesday of most months at the Lansing Municipal Court Complex (Lansing Police Department),  2710 170th Street. Meetings typically begin at 7:00pm.