Reporter’s note: My father, Allen Jongsma, was on Honor Flight Chicago’s September 18 flight. His experience gave me a family member’s access to the details involved in organizing an Honor Flight.

One of those World War II veterans is Lansing resident Otha Brownlow. He was accompanied by his brother, I. L. Brownlow, a Chicago resident.

The Brownlows were both privates in the Army. I. L. stayed stateside and served as a medic. Otha served with the field artillery in Germany and France (postwar) performing guard duty.

The two men were quiet throughout the check-in process, observing the highly organized flow of processing, and perhaps overwhelmed by all the activity. Still, Otha smiled when he found out his hometown newspaper was interested in his Honor Flight experience.

Lansing had a connection to another of the World War II veterans on Honor Flight 94: the oldest veteran of the day was 98-year-old 1st Lieutenant Clelia Ginay. Ginay lives in Schererville, Indiana, but her caregiver, Julie Lyzenga, is a Lansing resident. This was Lyzenga’s first experience with Honor Flight.

Two former Lansing residents were also part of the Honor Flight experience: Allen Jongsma (this reporter’s father) and Rev. Joel Nederhood. Jongsma is a Vietnam-era veteran who served stateside as a discharge clerk in the Marine Corps. Nederhood is an Army veteran who served as a field wireman during the Korean War, in the U.S. and Okinawa.

The 105 veterans on the September 18 flight represented five branches of America’s military: 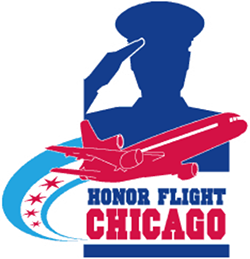 What is Honor Flight?

The Honor Flight organization is a network of regional “hubs” across the United States, each of which operates independently to provide a day of honor for military veterans. Founded in 2008, Honor Flight Chicago is the largest hub in the network.

The day of honor consists of a flight to Washington, D. C., to tour the war memorials in the company of other veterans and under the attention of an assigned guardian. The one-day, all-expense-paid trip is designed from beginning to end to honor and respect the veterans. It is typically a 16-hour day or more, and, as the Honor Flight Chicago website explains, “[The veterans] are treated as heroes everywhere they go.”

The attention to detail is impressive. Approximately five weeks before the flight, each veteran receives a letter that begins, “We are honored that you are joining us on Wednesday, September 18, 2019, for your Honor Flight!” Each veteran is assigned an ambassador, who communicates via phone and email everything the veteran and his family will need to know about the big day. Two days before the flight, the ambassador calls each veteran to thank him for his service again, to address any last-minute anxieties, and to wish him a good trip. With 105 veterans on a typical flight, the amount of communication handled by Honor Flight ambassadors is extraordinary.

Beyond handling the basic administrative details, Honor Flight works hard to facilitate connections between the veterans on any given trip. In Chicago, the veterans are divided into five groups—red, blue, white, green, gold—and assigned colored lanyards to represent the bus they will be transported on throughout their day in D.C. Volunteers try to keep veterans who live geographically close to each other in the same color group, so they can build connections and potentially keep in contact after their flight. They even give each veteran a supply of simple “business cards” with their home address, phone, email, and service information, so as they make friends, the vets can easily exchange information without having to look for a pen or fumble with their phone’s address app.

Helping to set the mood for the day, a duo known as Sweet Reminder provides entertainment for the veterans as they wait for boarding. For many years, Honor Flight Chicago was flying only World War II veterans, so Sweet Reminder focused on songs from the Andrews Sisters—with “Boogie Woogie Bugle Boy” a particular favorite. For Honor Flight Chicago #94, however, they acknowledged the veterans from three different wars, and performed hits from the 1940s but also the 50s and 60s. They channeled the McGuire Sisters to sing “Sincerely,” a 1950s love song:

During their rendition of the Armed Forces Medley, the duo had veterans from each military branch stand as their song was sung, and they made a point of wending through the audience to shake hands and thank each standing vet.

Honor Flight Chicago schedules flights once a month from April through October each year. Media access is granted by the Chicago Department of Aviation for three of those flights. As Director of Media Relations, Karen Pride chooses the flights by working closely with Honor Flight personnel. She then alerts Chicago media and provides instructions as well as an escort through security.

Just before sunrise the plane was ready to board. Honor Flight instructed veterans with physical limitations to begin boarding first, followed by the rest.

Every veteran is assigned a guardian. Some guardians are already with their vets at check-in in Chicago, but most are stationed in the Washington D.C. area and are waiting for their vets when the plane lands. Some guardians have a medical background and assist veterans whose health might make participation difficult. (In addition, three or four nurses ride each of the five buses, ready to address any medical needs.) For healthier, more active veterans, the guardians are simply available in a role similar to personal assistant—they ensure the vets stay hydrated throughout a day of walking, and they provide information about each of the sites visited.

The veterans are treated as VIPs throughout the day, and a police escort accompanies them from site to site. Only the president receives similar accommodation as he travels through the city.

Honor Flight Ambassadors provide detailed information to family members about welcoming their veterans home from their day of honor. Because construction at Midway International Airport currently limits the space available, families are asked to bring only four guests to the Welcome Home. They are encouraged to wear red, white, and blue, and to create posters welcoming their veterans.

All of the guests gather at the south end of the Floor Ticketing Level, and Honor Flight volunteers keep the crowd informed as they receive updates about the flight’s arrival.

Cadets from Great Lakes Naval Academy serve as escorts for the returning veterans. As the cadets arrive at Midway, the waiting families greet them with cheers:

While the family members are patiently waiting upstairs, the welcome has already begun downstairs. The Navy cadets receive brief instructions from Honor Flight personnel and from their commanding officer. They fall in to formation, sing “Anchors Aweigh” at the top of their lungs, and then march to the gate and line up again. The concourse is already filled with travelers who are waiting for their own flights, and who were unaware that they would be witness to a special interaction between America’s oldest veterans and America’s youngest.

Finally, the first veteran deplanes. She is Adeline Lence, a World War II Army veteran from Woodridge, Illinois. Lence is greeted with cheers from the crowd and a salute from her waiting escort, who is an officer of some rank, not a cadet:

Julia Lyzenga, still serving as guardian for Clelia Ginay, was third to deplane:

The crowd cheered, clapped, and whistled for each of the 105 veterans that walked through the doorway, and the level of enthusiasm never diminished. Some of the veterans were overjoyed and waved at the crowd as if greeting old friends. Others were amazed that so many people—complete strangers—would participate in their welcome home. And several were simply overwhelmed with emotion they couldn’t put into words.

The families have been waiting at the far end of the airport for over an hour by this point, yet the energy remains high. Each vet is given a hero’s welcome and reunited with family:

The power of volunteerism

The work of Honor Flight Chicago is done by more than 1,500 active volunteers and just 2.5 paid staff members. The organization works year-round to accomplish its goal of seven Honor Flights each year, flying once a month from April through October. All vets are welcome, and due to age, WWII and Korean War veterans receive priority selection for the next available flight.

Each flight requires about 1,500 volunteer man-hours before the flight ever gets off the ground.

Every flight costs over $100,000 and is supported completely by donations and fundraising.

The next fundraiser will be hosted at 115 Bourbon Street (3359 W. 115th Street, Merrionette Park, Illinois) on Sunday, November 10, 3:00–7:00pm. Tickets can be purchased and donations can be made at honorflightchicago.org/event/bourbonstreet/