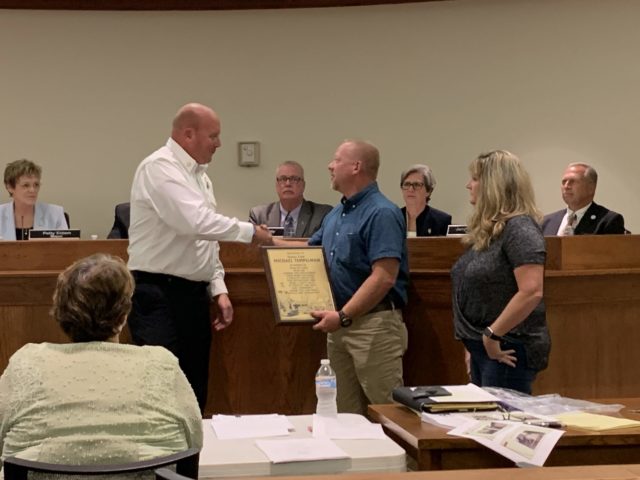 LANSING, Ill. (September 5, 2019) – The Lansing Fire Department recognized Deputy Fire Chief Mike Tempelman’s retirement at the September 3 Village Board meeting, marking the end of his 28 years of service in the department. Tempelman recently served as the interim chief of the LFD following former Chief Ken Verkaik’s retirement last September. Tempelman turned the reins over to Chief Chad Kooyenga in March of this year.

Chief Kooyenga presented Tempelman with a plaque as a token of appreciation for his years of service. Alongside his wife Sherry, Tempelman made a few comments before the board and spectators, thanking God and his family.

Of the latter he said, “They sacrifice a lot—the sleepless nights they’ve been worried about us. Some have missed Christmas parties [or] birthday parties because we had to go out and chase an emergency somewhere.”

Tempelman also thanked the Village and its citizens: “Without [them], [the LFD] wouldn’t be possible. All across the board, it’s all because of the people who’ve lived here. I’ve met a lot of neat people, people that grew up in the Village, that lived in the Village. I’ve worked with the administration over the past twenty-eight years…I made a lot of good friends. I consider them my family.”

Following his comments, Tempelman received a standing ovation and shook the hands of the Mayor, Administrator, and Village Board members.

Tempelman’s Deputy Chief position was filled by Bill Stubitsch, who was introduced and sworn in during the August 22 Village Board meeting.

“It’s truly, truly been my privilege to serve the people of the community,” Tempelman said.