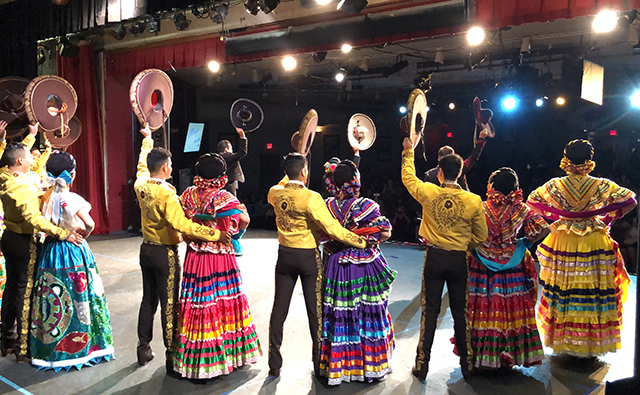 LANSING, Ill. (August 31, 2019) – Every seat was taken in TF South’s 850-seat auditorium, and people lined the outer aisles as well, bringing total attendance near 1,000 for this year’s performance of México en el Corazón. The three-hour event is performed by Ballet Folklórico—a troupe of 50 dancers, singers, and instrumentalists, all from Jalisco state in Mexico.

The tour is an initiative from NAIMA—the North American Institute for Mexican Advancement, a nonprofit that works to enhance relationships between Hispanics and the broader community. Showcasing the cultural traditions, music, and folk dances of Mexico in a free, public program is one of the ways NAIMA helps to build understanding, respect, and pride.

The tour first came to Lansing in 2017, when Lansing was one of 7 cities chosen to host the program, and the event was held at Memorial Junior High School. This year the tour will visit 18 cities, including Vancouver, British Columbia, Canada; and, for the first time, ending in Guadalajara, the capital of Jalisco, Mexico.

Lansing resident Martha Vargas is Sub-Secretary with FEDEJAL (Federation Jalisco), a nonprofit that helps Mexicans integrate into the United States, particularly the Midwest. “This free show is made possible with the help of various organizations, clubs, governments, sponsors, volunteers, and local businesses and community members,” said Vargas. “We want to give special thanks to TF South and Principal Jacob Gourley, as well as TF South’s Latin Dance Club for all their help, and to La Rosita Market and La Michoacana Compi of Lansing for their generous donations.”

A production the size of México en el Corazón involves multiple organizations working together, and representatives from many of them were introduced at the beginning of the show. TF South Principal Jake Gourley began with a welcome in English and Spanish, to applause from the appreciative crowd. Lansing Mayor Patty Eidam brought a basket of gifts and thanked the group for “bringing cultural awareness to our village.” Martha Vargas expressed thanks to the many sponsoring organizations. The President of FEDEJAL thanked the Village of Lansing and others who worked to make the show possible. A representative from Guadalajara’s government brought greetings from Mexico.

Sergio Suarez is president of NAIMA, and he described the whirlwind tour the troupe has been on—Las Vegas, Los Angeles, San Francisco, and more—most recently Millennium Park and Evanston, Illinois. In closing, he told the crowd, “We need to not forget why we came to this country. We came to work hard. We came to make a better future for our families. And we came to contribute to keeping and making this country the greatest country that it’s ever been.” The crowd whooped and applauded in agreement.

The show then opened with a soloist in a black mariachi gala suit singing America’s national anthem, accompanied by the simple strumming of guitars. As the song built to a climax, the stage curtains opened to reveal a nine-member mariachi ensemble playing guitarrón, vihuela, and violins, swelling to “the land of the free and the home of the brave.”

Each year, the theme of the program is “Mexico in the Heart,” and the theme song created for the program has become one of the most popular numbers in the show. Other numbers change from year to year, in an effort to keep the show fresh for returning audiences and make sure the full breadth of Mexican culture is represented. This year the sampling included cowboy dancing from the Mexican state of Baja California, love songs on psalter and harp, knife and machete dancing from the state of Nayarit, and Tapatian Serenades from Jalisco. (“Tapatian” is the colloquial term for someone from Guadalajara.)

The music and movements may have been especially meaningful to the Mexicans in the crowd, but others were moved by the performance as well, even without the nostalgia factor. “Thank you for bringing this to Lansing. This was really wonderful,” said an African American woman to Village Trustees in the parking lot after the show.

“I saw it in Millennium Park once,” said a Chicago resident who traveled to Lansing for Saturday’s performance, “but I like this one much better.” The venue was comfortable, and small enough to get a good view of the intricate footwork and detailed costumes.

Village officials are already wondering whether a larger venue will be needed if the show returns next year. Last year, the TF South auditorium was nearly at capacity, and this year people turned away when they couldn’t find a seat. México en el Corazón attracts an audience from at least a 30-mile radius, helping Lansing fulfill its vision of becoming a destination.

But for now, Martha Vargas and her huge network of sponsors, donors, venues, and organizations are focused on the 2019 tour. After Lansing, the show’s itinerary included Elgin, Illinois; Lafayette, Indiana; Nashville, Tennessee; and Dallas and Houston, Texas.

“Thank you to all of our sponsors, every performer, every dancer, everyone here today,” the emcee had said at the beginning of Saturday’s show. “All of these people, everyone is helping us carry Mexico in our hearts.”