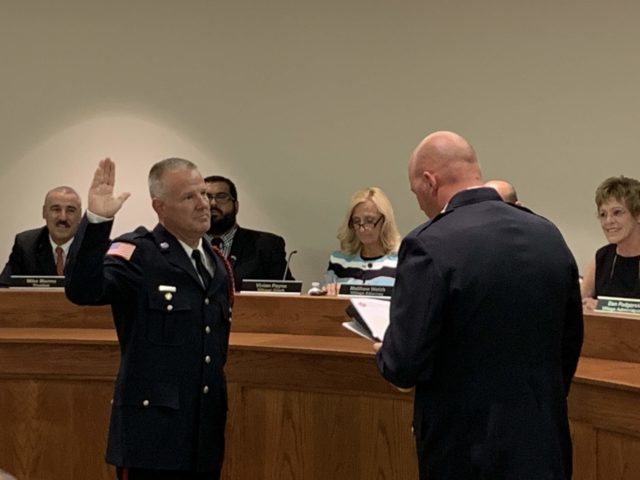 LANSING, Ill. (August 21, 2019) – The Lansing Fire Department introduced its newest deputy chief Bill Stubitsch at the Tuesday night Village Board Meeting. Stubitsch served as an engineer at the department before being promoted to the position.

Lansing Fire Department Chief Chad Kooyenga swore Stubitsch in before inviting his wife forward to pin his new badge on his uniform.

After receiving a standing ovation, Stubitsch took a moment to explain the significance of his badge number, which firefighters may choose for themselves.

“I was the 29th full time fireman in the Village of Lansing so I always had number 29,” he explained, “but all through my sons’ careers, all four of them played baseball and they were always number two…[so] my new number as Deputy Chief of Lansing is 2902.”

Stubitsch’s family was in attendance Tuesday night to witness his appointment.