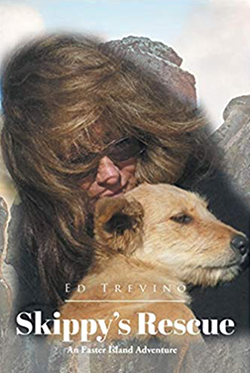 LANSING, Ill. (August 20, 2019) – Ed Trevino describes himself as a “lifelong animal lover.” The youngest of seven children, he spent his childhood in rural Chicago Heights, Illinois, before moving to Lansing in 1966.

The introduction to Trevino’s new book, Skippy’s Rescue: An Easter Island Adventure, includes a story about young Ed and his natural affinity for animals. The incident is told by a neighbor, who recalls two neighborhood German Shepherds that were kept in a chain-link fence and would bark and growl at passersby: “One day as I was walking home, I heard the two [German Shepherds] barking. When I looked toward the dogs, I saw Ed climbing the fence to be with the dogs. Before I could call out Ed’s name in fear the dogs would attack him, he had already landed on the other side of the fence with the dogs. Fearing the dogs would attack Ed, I hurried to the fence, only to witness Ed standing between the ferocious dogs, petting each dog as if they were best of friends.”

Skippy’s Rescue is the true story about a stray puppy who captured the heart of Ed Trevino and his wife Angelique while they were on vacation on Easter Island. When a stray puppy is placed on Trevino’s lap, a bond is formed, and an adventure begins. The story relays the trials and tribulations involved in rescuing the puppy, and a detailed account of the formidable logistics involved in bringing a foreign-born companion animal into the United States.

Published by New York City-based Page Publishing, Trevino’s book is “the ultimate must-read for anyone who has ever loved or been loved by a dog.”

Skippy’s Rescue: An Easter Island Adventure is available at bookstores everywhere, or online at: