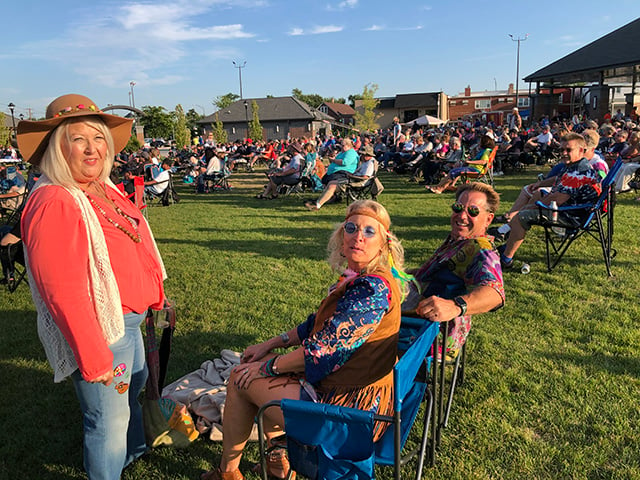 Peace and music—and tie-dye, fringe, and headbands—come to Lansing

by Melanie Jongsma and Jamilyn Hiskes

LANSING, Ill. (August 17, 2019) – After an estimated 3,000 people visited Fox Pointe throughout the Friday, August 9, opening celebration of Woodstock’s 50th anniversary, organizers and attenders were hopeful that the Saturday follow-up would continue in the same vibe. Those hopes were fulfilled—on the second and final day of Woodstock tribute bands, Fox Pointe and Lansing delivered and ended strong.

Library Director Debbie Albrecht took the stage at 5:00pm Friday to welcome the crowd—which had begun gathering at 2:30 that afternoon—and to convey her personal excitement about the event. “This is a dream come true,” she said. Albrecht was living in New York in 1969, and though she did not attend the original Woodstock, she has never forgotten the buzz surrounding the one-of-a-kind concert.

She introduced Fortunate Sons, a Creedence Clearwater Revival cover band, and they filled the next two hours with memorable classics, opening with “Green River,” “Susie Q,” and “Lodi” before moving into well-known hits such as “Bad Moon Rising” and “Proud Mary.”

At 8:00pm, Marrakesh Express—a Crosby, Stills, Nash and Young cover band—took the stage to continue the celebration. Their performance of “Everybody I Love You” was an example of how their tight harmonies pay tribute to the unique CSNY style:

One of the unique highlights of Lansing’s Woodstock celebration was having someone in the audience who was at the original 1969 Woodstock. Jim and Cindy Siergey had been featured in Jamie Hiskes’ August 1 article “Remembering Woodstock.” Marrakesh Express manager Mike Kucic read the article and reached out to the Siergeys. He made arrangements for them to come on stage Friday night and share some memories of their Woodstock experience.

Marrakesh Express played until 10:30pm, and Day 1 of Lansing’s Woodstock Anniversary Celebration ended with friends and strangers dancing together near the stage:

Day 2 of Woodstock in Lansing began at 1:00pm, when booths along the north edge of the venue opened for business. A variety of vendors got into the theme of the weekend, selling macramé, potted plants and “hippie kits” to people arriving for the music, which began at 2:00pm.

Anna Stange started off the Saturday celebration with nothing more than her clear, beautiful voice and an acoustic guitar as she strummed through the hits of Joan Baez and other artists of the 1960s. Barefoot and dressed in a flowy, orange-and-green shirt, Stange looked a bit like a time-traveler serenading the steadily-growing crowd. When she broke into Woody Guthrie’s iconic “This Land is Your Land,” it almost felt like stepping back in time.

And in the folk song “Joe Hill,” Stange captured some of the sentiments of the 1960s:

The crowd grew throughout the afternoon and evening as each new performance attracted additional fans. Between sets festival-goers explored the vendors on the grounds for whatever they craved—whether it was granola and lemonade from the Troost tent, patchouli oil from Hippieguy, or barbecue from Lynnie Ques. Round mirrored sunglasses and flowered headbands soon became commonplace as attendees of all ages began to dress to blend in with those who had come already wearing tie-dye.

Vocalist Ugochi Nwaogwugwu was up front with a yellow dress, maracas, and a mic, while the other band members provided vocal support and groovy musical accompaniment. Ricky Rico Baker, who started the band in 1993, was beside Nwaogwugwu shredding on guitar and singing. The congas played by Joe Rendon and the timbales played by Jaime Claudio added a salsa flare to the music, while drummer Raymond Roque, bassist Jesse Tobias, and vocalist Devin Thompson rounded out the band’s smooth sound. Hits like “Oye Como Va” and “Black Magic Woman” seeped over the crowd and nudged many people to get up from their lawn chairs and groove. Much like Santana did at that farm in 1969 when he was barely known outside California, Rico! added a unique and vibrant flare to the celebration at Fox Pointe.

The sun was just beginning to set behind the pavilion by the time rock cover band Who’s Next began their performance.

Specializing in songs by the legendary British punk and rock band The Who, Who’s Next also looked to be straight out of the Summer of Love. Lead singer Kevin Ward especially looked the part with his long curls, leather fringe tank-top and low-rise jeans. He swung his mic around as far as he could, emulating Woodstock-era Roger Daltrey with more than his voice. Covering the classics such as “Who Are You” and “Baba O’Riley,” Ward’s vocals, Greg Kaye’s drums, Joe Cuttone’s bass, and John Ziganto’s guitar successfully upheld the illusion that The Who were actually onstage. Ward’s wail in “Won’t Get Fooled Again” was impressive, as was his stammering in “My Generation.”

“That’s what Woodstock was all about,” Ward said after performing that song. “It was a celebration of that generation.”

Before the band started playing, the guitarist raised two fingers in the air in a peace sign and declared, “This is called a freak flag. It doesn’t hurt anyone, it doesn’t cost anything. It stands for peace and love. If this offends you, I invite you to leave now.”

That set the tone for Axis’ closing set. Crooning vocals, groovy beats, and downright scary guitar skills were the perfect end to a busy, jam-packed festival. By the time the final note was played, people were dancing and cheering, and the lawn was so tightly packed with blankets and chairs that it was hard to even cross it.

Woodstock was the end of the 60s, and it was a chance for people to take a break from the chaos of the decade and revel in community and love and great music. For the thousands who visited Fox Pointe last weekend, Lansing’s Woodstock 50th Anniversary Celebration offered a fun glimpse back at that era—a chance to wear tie-dye, laugh with strangers, and sit on the lawn enjoying music and nostalgia. We can only hope that on the 60th anniversary, they’ll do it again.