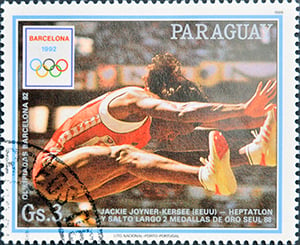 The retired American track and field athlete won three gold medals and is ranked among the all-time greatest athletes in the heptathlon as well as long jump. On top of her athletic accomplishments, Joyner-Kersee is an active philanthropist, giving back to her Illinois hometown though her work supporting children’s education, racial equality, and women’s rights.

“A six-time Olympic medalist who has spent her life inspiring young women and fighting for a quality education for all children, racial equality and women’s rights, Jackie Joyner-Kersee represents the best of Illinois,” said Governor JB Pritzker. “I couldn’t be prouder to join a legendary East St. Louis native to kick off the Illinois State Fair Twilight Parade.”

“We are thrilled to have Jackie Joyner-Kersee kick off the 2019 Twilight Parade,” said Kevin Gordon, Illinois State Fair Manager. “Her mission to encourage young people in our state to pursue athletics and academics fits perfectly with our theme Building our Future.”

Admission to the fairgrounds is $5.00 for adults and $3.00 for seniors (60 and older). Kids 12 and under are free on Preview Day (Thursday). All carnival rides, including those in Adventure Village, will be open by 5:00pm and offered at a discounted price.

The 2019 Illinois State Fair takes place August 8–18 in Springfield, Illinois. More information is available at www.IllinoisStateFair.info or by downloading the free mobile app, available for both Apple and Android devices.