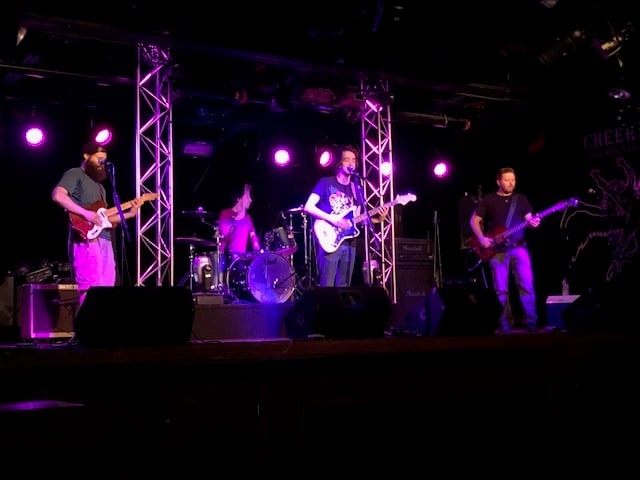 Correction: In an earlier version of this post, and in the print version of the article, we used an incorrect spelling of Andrew Weglarz. It has been corrected below, but we apologize for the error.

LANSING, Ill. (August 7, 2019) – Griffin McGreal’s voice can easily fill a music venue. He’s focused and determined as he strums his guitar and belts out the words of his band’s songs from the stage at Cheer’s (4660 147th St.) in Midlothian, Ill., on July 28. Behind him, drummer and percussionist ­­Jeff Lane rachets up the hype in the space with every beat, while lead guitarist Matthew Rodriguez and bassist Andrew Weglarz craft melodies and riffs that will stick in the audience’s head long after their short set is over.

These four make up the Lansing-based alternative rock band Grand Pond. Though the band is young, its members already have a clear vision of the future.

“We started in October [2018] and really just came out of my brother [Weglarz], who’d picked up the bass for a couple years,” McGreal, 22, said. “I was always writing music, and he kind of just pushed me in the right direction, like, ‘Why don’t we do something with this?’”

Grand Pond’s influences are listed on the band’s Facebook page, and the list ranges from Pink Floyd to The Smashing Pumpkins to The Killers. They all combine to create a strong alternative base with a slight electronic element as well.

“We do a lot of pre-recorded pianos and we’ll edit them into backing tracks for live performances,” McGreal said. “Whether that’s a piano key ringing out or a sample from something, it depends.”

It hasn’t been an easy road for the band thus far. Between losing their original drummer and saving up for studio time to record their debut EP, Joyride, there’s been a fair share of ups and downs. But Grand Pond has already played venues such as Jack’s Pub (3325 Ridge Rd.) and J.J. Kelley’s (2455 Bernice Rd.) in Lansing, and on July 26, they released their debut single, “Pups.” Full of catchy riffs and honest lyrics, the song is the perfect starting point for the young band and an enticing preview of what’s to come.

“[Pups] was probably one of the first songs we wrote when we got together,” McGreal said. “It was always this milestone to get it recorded and put it out, and it’s wild that we’re actually here now. …It’s probably our poppier track, like our radio single. Everyone seems to love it.”

McGreal said honesty in their music is something Grand Pond takes very seriously, and part of how they do that is through their lyrics.

“Pup” features wistful, romantic lyrics— “Our lips touch and once again I’m existentialist” —and plainly self-deprecating ones —“You’re a god and I’m your dog / Won’t you let me feel blessed” —that are common in alternative music. Paired with Rodriguez’s and McGreal’s hefty vocals and catchy instrumentals, they create a promising foundation for a band that could go far in Chicago’s alternative scene. But the music isn’t the only thing that will keep Grand Pond together.

“We do a surprisingly good job of getting along,” McGreal said. “I think that’s our best strength, that we were all friends before any of this happened. It’s turning into this thing where the local scene is being more and more present, and we’re getting a lot of support in areas we never thought we would—whether that’s bands we’ve played with or just hometown support. It’s been a dream.”

Getting to the Pointe

Where do they think they’re heading in the next year or so? Hopefully to the stage at Fox Pointe, and even to some of Chicago’s local radio stations—93.1 WXRT, to be specific, according to McGreal.

“One of the things we talked about when we started was, if we’re not playing Fox Pointe by next year, what are we even doing?” McGreal said with a laugh.

Grand Pond’s next show is August 15 on Chicago’s North Side, at HVAC Pub (3530 N. Clark St.), with Hammond, Indiana-based alternative band Black Hand. For those up for a good old-fashioned rock show and discovering new music by a local band, it’s bound to be a stellar event.

For more information, visit Grand Pond’s Facebook page or email the band at [email protected]. “Pups” is available to stream and purchase on all platforms, including Apple Music, Spotify, and Bandcamp. Click below to listen now.