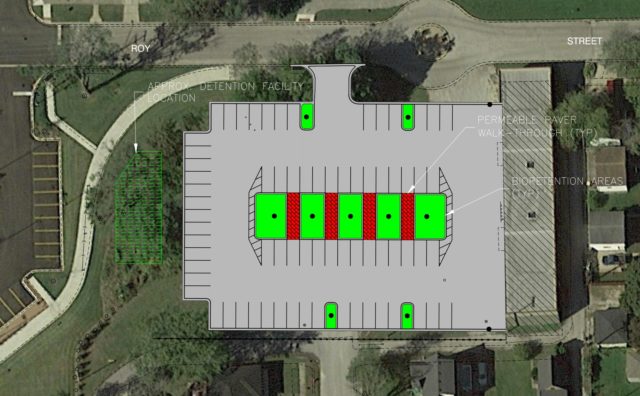 LANSING, Ill. (August 2, 2019) – A new Fox Pointe parking lot is planned for completion before next summer’s slate of events, pending final approval by the Village Board of Trustees. Village Engineer Jeff Pintar gave a presentation during the Committee of the Whole meeting on July 16 outlining the details of the environmentally-conscious project to be constructed northwest of the event venue. The project was first proposed in January before the Village Board.

Once approved, the project will be 58% funded by the Metropolitan Water Reclamation District of Greater Chicago (MWRD), who will provide $250,000 for the project.

Pintar called the new lot a “green infrastructure parking lot,” explaining “as part of the application program, we need to keep the storm water on-site.” The Village had to apply for the funds from the MWRD, who is committed to managing stormwater in more environmentally-conscious ways.

To this end, the parking lot will use bioswales to absorb water rather than having the water run directly into the sewer system. Bioswales are landscape elements intentionally designed to deal with water run-off. The central bioswale in the new lot will feature soil, plants, and permeable pavers that will absorb water. Sewer drains will be present above the bioswale elevation but below the elevation of the parking lot surface to ensure that the parking lot does not flood in the event of extreme rain.

The lot will offer 71 spaces to patrons of Fox Pointe, the Pennsy Greenway, Winterhoff Park, and other nearby attractions. The project will be constructed to allow the Village continued use of the garages on the north side of the lot and will no longer allow vehicles to cut through the area to get from Washington Street to Roy Street and vice versa. There is however, still an alley that runs along the perimeter of the lot that will be maintained. The entrance to the lot will be on Roy St, just south of the existing roundabout.

The MWRD will also work with the Village to create signage that will explain what green infrastructure is to those who use the lot, adding an educational element that gave the project greater appeal in the eyes of the MWRD.

“I think it’s a nice addition,” concluded trustee Brian Hardy after Pintar had given his presentation, “From what I see right now, it’s nice that I haven’t heard of any problems with parking, but I think as Fox Pointe gets more well known, the crowds are going to grow and [this new parking lot] is going to enhance and help people have a place to park that is close to the venue.”

The Village Board will decide whether or not to approve the lot’s construction at its next meeting on August 20.

The Lansing Journal first reported on this parking lot in January when the idea was originally brought before the Village Board. That article can be accessed using the link below:
Green Infrastructure grant to help pay for additional Fox Pointe parking