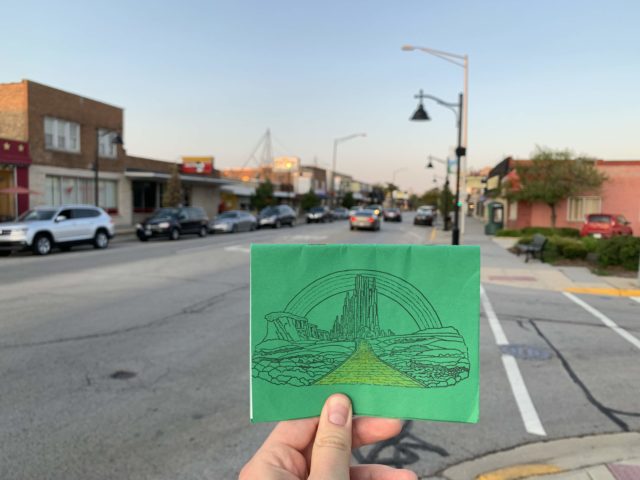 LANSING, Ill. (July 25, 2018) – Grace Rubio was following the Yellow Brick Road. She didn’t click her heels or talk to tin men, but as she opened the front door to one of Ridge Road’s many businesses and received a sticker to place in her green booklet, she was taking the next step toward finishing her journey—not in Oz, but in Lansing.

Rubio is one of hundreds of Lansing residents who have begun to see Lansing through new eyes during the last month-and-a-half as the Lansing Public Library’s “Follow the Yellow Brick Road” scavenger hunt reaches its final weeks. Themed in honor of the Wizard of Oz’s 80th anniversary this summer, the scavenger hunt takes participants on a clue-filled tour of Lansing locations.

“Every weekend I’m doing a little bit, and during the week after work,” said the twelve-year Lansing resident with a smile as she crossed Ridge Road to get from one business to another.

Booklets and stickers and iPads, oh my!

Rubio was first made aware of the scavenger hunt when she passed through the library and saw the large “Follow the Yellow Brick Road” display in one of the inside windows, created by library employee Manuel Cord-Cruz. The hunt, which began on June 10, starts after participants show their library card and receive a small green booklet with a picture of Oz on the front. Within the booklet are 20 Wizard of Oz themed clues that lead to locations all over Lansing, most of which are businesses. These locations have a “follow the yellow brick road” sign in their windows that greets scavenger hunters as they enter to receive a sticker to place in their booklet–the stickers are also designed by the talented Manuel Cord-Cruz. Once all 20 stickers are collected (or 19 with a local pastor’s signature as a replacement), the booklets can be returned to the library where the participant’s name will be entered into a drawing for one of 11 prizes consisting of a TV, iPads, and Amazon Fire tablets.

We’re off to meet the community

According to Library Director Debbie Albrecht, the idea for a community-oriented scavenger hunt first came about a few years ago at an intergovernmental meeting. “Pastor Childress from Grace Church [first] mentioned the idea of a community hunt,” said Albrecht, “I thought it was a great idea…. It’s just summer fun.”

Lansing resident Jennifer Polley agrees. A kindergarten teacher, Polley enjoyed doing the scavenger hunt with her two nieces—Katelyn and Elizabeth—from out of town. “I thought it was extremely creative,” she said, “[My nieces] loved reading the clues out loud and seeing if I could figure out where we needed to go.”

Some of the clues in the booklet require some Lansing knowledge while others are more straightforward. One of the simpler clues reads, “The Wizard of Oz is mysterious & a bit scary with his great and powerful voice! Our wizard or should I say Mayor is kind and friendly. She spends her working day in a place easy to find. Her ‘guards’ can give you what you seek!”

“As a lifelong Lansing resident I did not think it was hard to figure out the clues,” Polley said, “but I do think some of them could be difficult if you were new in town or not familiar with the businesses…. There were a few businesses on the hunt that I had never been into.”

Albrecht contacted local businesses and organizations to ask for a $50 donation from each to help purchase the 11 prizes which will be awarded at the Woodstock Experience on August 10 at Fox Pointe. Participants do not need to be present at Fox Pointe to win.

Like Polley, Rubio has enjoyed the opportunity to travel across town and visit some businesses she might not have otherwise. “Since I work far away from here,” she explained, “I’ve never really went into certain businesses…. There’s a lot of them where you say, ‘Hey I’ve gotta come back here.’ I’m jotting some stuff down about where I like and where I’d like to go back.”

The businesses that comprise the “Yellow Brick Road” are excited about being part of the action, too. “It’s good for business,” said Joyce Jellema, who has been passing out stickers at her business. “But it’s good for the community because [the participants] will say, ‘Oh my gosh, I didn’t know you guys were here! Look what you’ve got!’”

Rubio isn’t the only one who has used the Oz-ian hunt to get better acquainted with Lansing. According to Albrecht, the first participant to finish the journey around town was new to Lansing and used the experience to get to know his new neighborhood.

Another participant lost her husband a few months ago and was talked into doing the scavenger hunt during one of her many visits to the library. According to Albrecht, she came back a few days later with a “big smile on her face and said how much fun she was having.”

“That makes it all worth it,” Albrecht said. “Absolutely.”

Albrecht hopes the experience will become a regular occurrence in Lansing, though she does not anticipate starting another hunt next summer.

“Follow the Yellow Brick Road” scavenger hunt booklets can be obtained at the Lansing Public Library where, as of this writing, over 150 booklets are still available. Completed booklets must be turned in to the library by August 9 or brought to the Woodstock Experience on August 10. Winners will be announced before the last band of the evening performs on August 10.

Participants are not promised to find courage, a heart, or a brain as they travel across Lansing, but they are encouraged to meet new people, visit new places, and have new experiences that might leave them saying, “There’s no place like Lansing!”