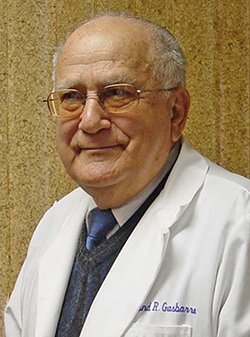 Dr. Gasbarro was one of 15 doctors who started Podiatric Foot Surgery at Northlake Community Hospital in 1965 and brought podiatric surgery to Suburban Heights Medical Center in January 1979. He participated in training Podiatric Interns and Residents at Northlake Hospital from 1965 to 1982. Dr. Gasbarro was a Member of the American Podiatry Medical Association, Illinois Podiatric Medical Association, Board Certified Academy of Ambulatory Foot Surgery & American Council of Certified Podiatric Physicians and Surgeons, Diplomate American Academy of Pain Management, Fellow American Association of Hospital Podiatrists, and American Association of Podiatric Physicians and Surgeons. He trained at Civic Hospital and Clinic: Detroit, Michigan, and was awarded First Prize by the American Society of Podiatric Roentgenology Annual Thesis Award his Senior year 1959, and received First Place in the American Academy of Podiatry Administration Essay Contest for Podiatrists throughout the country in 1973.

Dr. Gasbarro was a member of Spaghettio’s and 21 Men Club. He also volunteered his time as the Podiatrist at Bloom and Thornton Township Senior Center. He dedicated his life to analyzing and addressing issues of podiatric medicine and loved his profession and patients. He was a true mentor to students, and his concern for the homeless and others less fortunate established him as a leading humanitarian.

He was born and raised on Hungry Hill in Chicago Heights, IL, and never forgot where he came from. A member of Olympia Fields Country Club for over 43 years, Armand also enjoyed his family and friends at barbecues, gatherings, golfing, and card games.