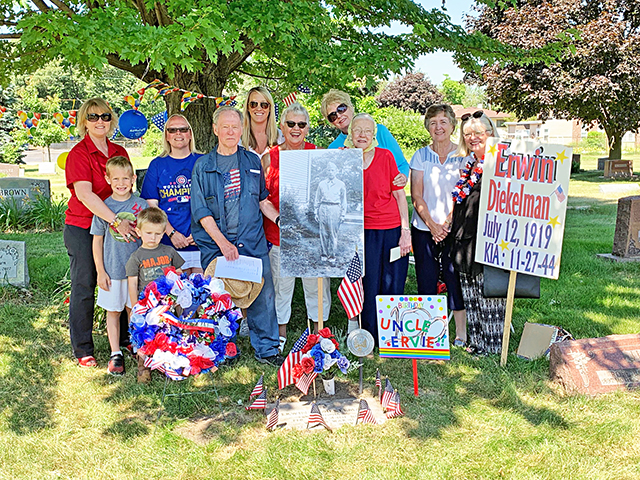 “Lest we forget”—Happy Birthday, Uncle Ervie

Note: An earlier version of this story included incomplete information about the Diekelman family’s history in Lansing. We are grateful to readers who made us aware of the Diekelmans’ role in Thornton history, prompting us to get more information from the family.

LANSING, Ill. (July 19, 2019) – On Friday, July 12, Lansing’s Oak Glen Cemetery was unusually animate with a happy family reunion that included patriotic decorations fluttering in the breeze, joyful singing, and homemade cupcakes. The occasion—which could easily be mistaken for a belated Memorial Day or Fourth of July picnic—was a posthumous centennial birthday celebration for Erwin Henry Diekelman, a young Thornton man whose ultimate sacrifice during World War II at the age of 25 will never be forgotten by his extended family who gathered at the cemetery. The proud military family chose to honor “Uncle Erv” by throwing him a gravesite 100th birthday party with decorations, birthday song, and cupcakes.

From Lansing to Thornton

Erwin Henry Diekelman was born on July 12, 1919, the eighth of nine children of William C. and Anna Louis (Schultz) Diekelman. Before she married, Anna had lived at the Schultz homestead in Lansing next to St. John Lutheran School on Wentworth Avenue, now St. John Commons Condos. After marriage, the Diekelmans lived in Thornton, but family ties in Lansing remained very strong.

Erwin was baptized and confirmed at St. John Lutheran Church. He graduated Thornton Public School in 1932 and Thornton Township High School in 1936. In his younger years, Erwin, along with his eight siblings, helped run their parents’ grocery and butcher shop located at 114 East Margaret Street in Thornton, across the street from the Village Hall. They also raised poultry and grew a small garden.

“He studied to be a spy”

On November 25, 1942, Erwin was inducted into the U.S. Army, and after basic training he was stationed at Camp House in Texas, where he drove a tank. Later he was at Camp Cleburne, which served as a POW camp for German prisoners. “There’s not much record of it,” his niece Janet Sanders explains, “and there wouldn’t be, because he was involved with Intelligence, but he went to a camp in Texas…where he studied to be a spy.” She adds, as possible evidence, that her uncle “looked very German” and that he had studied German in high school.

By July 1944, Erwin was sent into action on the Western Front in Germany. As a Private First Class in the 22nd Infantry, 4th Infantry Division, he fought in the Battle of Hürtgen Forest, the longest battle on German ground during World War II and one of the worst defeats for the U.S. Army. In three months, from September 16 to December 16, 1944, the Americans sustained almost 33,000 casualties. All accounts of the battleground describe the conditions as “hellish.” Pfc. Diekelman was in action five months before he was wounded at Hürtgen Forest.

Erwin was wounded on November 23, 1944, and sent to a military hospital in France, where he died four days later. He was buried in an American military cemetery in Belgium, where every day local women laid fresh flowers on the soldiers’ graves. Almost three years later, in October of 1947, the first of the war dead were returned to New York City on board the transport Joseph V. Connolly. Pfc. Diekelman was among the 6,200 returned, and he was recognized along with others in a memorial service held at Soldier Field in Chicago. His remains were reburied with full military honors in Oak Glen Cemetery on November 13, 1947.

Janet Sanders, who organized the July 12th family reunion, was Erwin Diekelman’s niece. She was only six years old when her mother, Martha, received the tragic news of her brother’s death. “I remember my mother ironing and crying and crying and crying…. He was wounded first and then four days later died in the hospital.”

Jim Rich, son of Erwin’s older sister Amanda (Diekelman) Rich, added, “They got him with a mortar.” Janet elaborated, “He was with three guys in a fox hole and had his legs blown off, and flown to the hospital, but then didn’t make it.”

Jim added appreciatively, “And one man [of the three] came back—and came and seen my Grandmother and Grandfather, and he was in uniform and everything—and they had a store in Thornton, my grandmother and grandfather—and he came and visited them and they talked for hours.”

The motto of the 4th Infantry Division is “Steadfast and Loyal.” The motto that once belonged to Pfc. Erwin Diekelman, now carries over to his extended family. “We’re definitely a military family,” Janet proudly proclaims. “Jim was in the army. His brother was a marine. [My daughter] Connie’s son was a marine. And her son-in-law is still active in the army. We are very proud to be descendants of such a brave, young American and will attempt to keep his memory alive throughout the generations to follow. That is one reason we are here today. He never had the chance to marry and have a family of his own, so it is up to us.”

“Lest we forget…” Jim added.