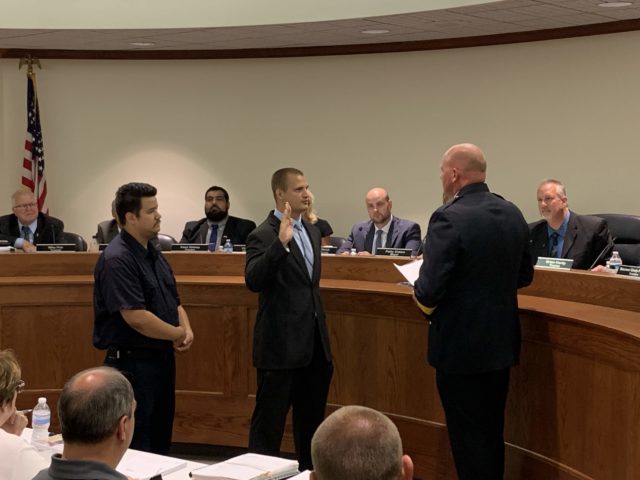 Robert Karpiel and Jordan Moraga sworn in on July 16th

LANSING, Ill. (July 18, 2019) – The Lansing Fire Department introduced its two newest members at the Tuesday night Village Board Meeting—Robert Karpiel and Jordan Moraga. The men were sworn in by Lansing fire chief Chad Kooyenga and introduced to Village officials.

Before swearing them in, Chief Kooyenga said, “The Fire Service is steeped in tradition. One of the traditions is [being sworn in] in front of your family and friends that are here tonight as well as the Board, the trustees, and the people you’re going to serve.”

Kooyenga then swore in Karpiel and Moraga, giving each of them time to shake hands with the Village administration and Board of Trustees.

Karpiel has been a paramedic for four years, having trained as a firefighter in Burbank, IL. Moraga has two years experience as a paramedic and trained in Homewood, IL.