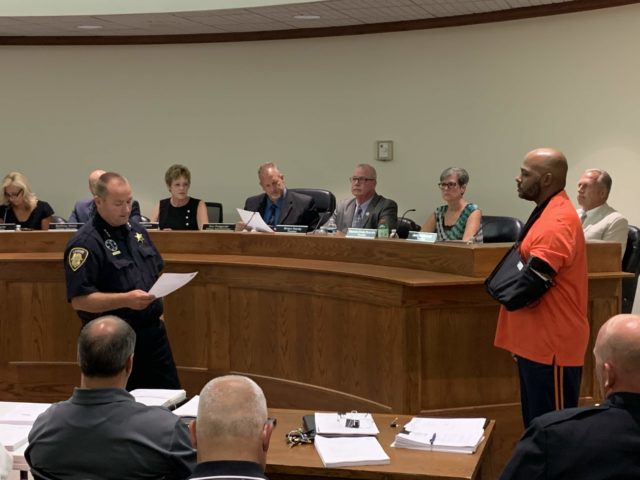 LANSING, Ill. (July 18, 2019) – Lansing Police Officer Wilson Pierce was commended by the U.S. Department of Defense via letter, which was read during the Village Board meeting on July 16. Officer Pierce had assisted the department during a home search in Lansing on June 18. Lansing Police Chief Dennis Murrin received a letter from the Department of Defense agent in charge of the search, commending Pierce for his “professionalism and patience.”

The full text of the letter Chief Murrin received is included below:

I want to commend you for allowing the assignment of an officer to assist our agency with a federal search warrant we served in the Village of Lansing on June 18, 2019.

Officer Pierce exhibited great professionalism and patience with a citizen of your Village, at the same time providing my team an extra layer of safety. Officer Pierce was able to build on the relationship that he had established, thus allowing members of the team to take over, and freeing Officer Pierce to return to patrol.

I understand it is a burden to have a patrol officer tied up with another assignment, but I am so thankful that you allowed us to have Officer Pierce for a few hours. He has a great professionalism about him and the community is lucky to have his service.

After the letter was read and Pierce received a round of applause, he made a few remarks thanking the Village and the Department of Defense for recognizing him. “I was just doing my job—and that’s what you guys hired me for,” he said, “and I’m always appreciative of this Village because this is the Village that gave me my opportunity. So, thank you.”

Before the board meeting continued, Trustee Mike Manno said, “With all the negativity towards the police departments and police officers, it’s a privilege—it’s an honor—to have [the Department of Defense] compliment [an officer]. Especially one of our guys, so, thank you.”

Officer Pierce is a detective in the Lansing Police Department and is very involved in the community. Pierce started the HOME (Helping Our Minors Excel) program in 2008, which is a mentorship group designed to impact kids ages 10-18 through community service and workshops. He also set up Lansing’s “crosstown classic” basketball game between Heritage and Memorial middle schools to foster healthy competition and sportsmanship. Pierce has served in the Lansing PD since 2001.