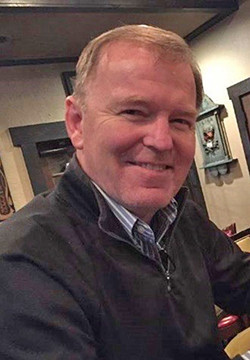 Tom was born on Mother’s Day, May 13, 1956, in Chicago, IL, to Raymond and Barbara Richardson, the second of eight children. As an infant, he moved with his family to Lansing, IL, and completed grade school and high school there. He was a member of the Class of 1974 at TF South High School, where he lettered in three sports. Tom began college at Western Illinois University and finished at Southwest Minnesota State University in Marshall, MN, where he played football and was a nationally ranked power lifter. He received a bachelor’s degree in physical education. His studies continued at South Dakota State University in Brookings, SD, where he received a Master’s degree in exercise physiology, the first in his family to receive a graduate degree.

Tom’s career took him all over the western United States. He was an assistant strength coach at Stanford University before being named head strength coach at the University of Wyoming and later Colorado State University. As his coaching career ended, he moved to Spokane, Washington, to become the Athletic Director at the Spokane Club. He was often a consultant for fitness facilities and collegiate weight rooms all over the country. At his passing, he was extremely excited about a new project in Greeley, CO.

Tom loved all sports all the time. As a coach, he trained athletes from the football team to the rodeo team and everything in between. Tom loved motorcycles, with a special penchant for Honda Gold Wings. He also loved going on trips to Sturgis, SD, with his Harley friends. With his family scattered throughout the country, Tom created a family of sorts with his friends and co-workers wherever he was. They loved making fun of Tom’s refusal to replace anything he had if the old version still worked.

Tom was pre-deceased by his parents, grandparents, and sister, Ann Marie. He is survived by his siblings: his sister Kathleen Petrikin and her husband Ron, of Tulsa, OK; brothers Daniel of Tampa, FL, Kevin of Tulsa, OK, Bob and wife Libby of Lowell, MI, Ed of Fort Collins, CO, and Bill and wife Jeanne of Lansing, IL. He is also survived by seven nieces and nephews and a host of friends and co-workers.

A celebration of Tom’s life will be held at a later date.