Reggae and rainstorms bring people together

LANSING, Ill. (June 26, 2019) – It started out like most other Fox Pointe concerts in the summer series. The first dry, warm Wednesday in three weeks brought the crowds onto the lawn as well as under the pavilion to hear Unity the Band, an award-winning roots, rock, and reggae group from Appleton, Wisconsin.

Unity lead singer Pita Katobalavu seemed to personally enjoy interacting with the audience between songs, acknowledging Chicago as the House of Blues before breaking into a traditional blues number infused with his own Fiji flavor.

And the concert continued:

The crowd enjoyed the big finish:

Around 8:15pm, noticing the number of families on the lawn, Katobalavu invited all the “kiddies” to come up and take the stage. A few dozen children streamed forward, some confident and excited, some unsure. The band began playing Solomon Linda’s “The Lion Sleeps Tonight,” a classic pop and folk song.

Katobalavu encouraged the kids to sing along, but the song was less familiar to them than to their parents in the audience. After restarting the band a few times to give the youngsters a chance to figure things out, he changed tactics. “Ok, are you ready to dance?” he asked the kids, and they responded with various moves, including the floss, a swing step, and somewhat rhythmic jumping up and down.

A change of plans

After this number, around 8:40pm, Fox Pointe Director Tony Troncozo took the stage and let the crowd know that lightning had been sighted in the area. Fox Pointe concerts happen rain or shine, but lightning is one weather condition that can force a change of plans. Troncozo had been tracking a nearby storm, and he explained, “I’m gonna put the band on break until that storm passes through. Hopefully it will blow over soon.”

It was not yet raining at this point, and the night was still warm, so people remained in their lawn chairs, relaxing and socializing. Band members set their instruments down and stepped off the stage to chat. As the first gentle raindrops began to fall, some people packed up and went home; others moved to the pavilion.

Katobalavu asked band members Timothy Perkins, Anthony Robert Bessen, and Kelvin Ayres to grab some of their more portable instruments and head to the pavilion, bringing the music to the people. With upright bass, acoustic guitar, and drumsticks accompanying him, Katobalavu stood atop a pavilion picnic table and musically assured the crowd with an unplugged version of Bob Marley’s, “Every Little Thing’s Gonna be Alright.”

A change of weather

Before 9:00pm, the winds picked up, the temperatures dropped, and the rain turned into a deluge. “Not again!” one audience member cried, bemoaning the fact that the only consistency in this spring’s weather has been Wednesday-night rain showers, now reaching three weeks in a row. Through the gasps at the lightning and the shrieks each time the wind blew now-cold rain through the open walls, people were still smiling under the pavilion. The a cappella concert continued with an audience-participation version of Neil Diamond’s “Red, Red Wine” and Bob Marley’s “No Woman, No Cry.”

Band members finally had to set down guitar and bass to run back to the stage and ensure that the tarps covering their equipment were secured.

Katobalavu used that time to chat with the crowd around him, until he was inspired to take the makeshift stage again and speak from the heart. “Listen up, I wanna tell you something,” he shouted.

Extending his arms across the pavilion, he said, “Look at the crowd here. Look at the races here.” The crowd looked around and cheered in response. Katobalavu continued, his Fiji accent and bright, gap-toothed smile conveying a friendliness underneath the seriousness of his conviction. “You got different races here—in one building. If that’s not America, then what is this, y’all?” The crowd cheered again. “We can do this thing,” Katobalavu affirmed. And holding up his index finger he proclaimed, “One Love.” The crowd recognized the reference to the Bob Marley song and cheered again.

An audience member sitting near the table-stage picked up the guitar that had been left by Bessen and began strumming the chords to the Beatles’ “Let it Be.” “Oh, you play?” asked Katobalavu, encouraging the man to continue, and leading the crowd in another sing-along.

Weather reports would later show that up to four inches of rain fell in Chicago’s southern suburbs that night, causing flash flooding and power outages. Through it all, until well after 9:00pm, the Fox Pointe pavilion was filled with laughter and song. Before the rain-splashed crowds headed home, Lansing Mayor Patty Eidam, who had been enjoying the impromptu concert from a corner of the pavilion, approached the table-stage to thank Katobalavu and Unity the Band for their above-and-beyond performance.

Katobalavu reached for her hand and pulled her onto the table top with him. “Let’s give her a big hand!” he called to the cheering crowd. “One Love!”

The Fiji singer and the Lansing mayor laughed, and embraced, and then departed, each bringing echoes of music into the stormy night. 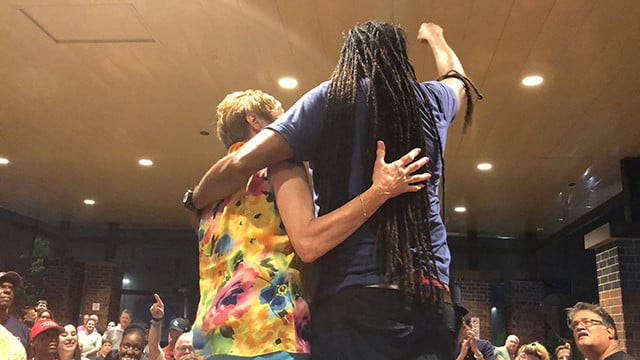