CHICAGO HEIGHTS, Ill. (June 19, 2019) – When local families walk in the door of Respond Now on Sept. 5, it will mark 50 years since the Chicago Heights-based social service agency opened its doors to help those in need.

Respond Now opened in 1969 as a “referral and emergency care center” to bring together the efforts of six churches. Five decades later, the agency is still providing a way for South Suburban neighbors to help each other, an achievement that will be celebrated at Flossmoor Station on Sept. 19 with a fundraiser where community members can raise a glass and share their support.

This is an area that has been hard hit by economic changes, said Executive Director Carl Wolf.

“The South Suburbs have a higher rate of poverty than the rest of Chicagoland, so the service we provide gives extra stability to the community,” he said.

“The volume of people we see is a sign our services have an impact. Everyone needs the basics: food, clothing, and shelter. If we want our communities to be successful, it’s important to have the basics in place,” he said.

Families pick up a week’s worth of groceries once a month at Respond Now’s food pantry. Some clients get money for prescription medicine. And the agency helps about 100 families a year to stay in their homes when a financial crisis hits through one-time payments for mortgage, rent, or utilities. “They have to show they can pay their bills normally,” Wolf said.

When it was founded in 1969, Respond Now’s mission was to provide a way for South Suburban residents to help their neighbors in six suburbs. A single employee, whose salary was paid by Catholic Charities, led dozens of volunteers as they determined the need and how to meet it.

Today the organization is still volunteer-driven, with more than 6,000 hours contributed every year, and supported financially by area businesses, churches, and individuals as well as grant funding.

The fundraiser on Sept. 19 provides a chance for the community residents to hear live music, mix and mingle, and lend their support in honor of Respond Now’s 50th anniversary. Raffle tickets include an option to be “brewmaster for a day” at Flossmoor Station, noted for producing numerous award-winning craft beers over the past 25 years.

Additionally, Flossmoor Station will sell a signature beer during September for the social service agency, with a portion of the sale price going to Respond Now.

Respond Now Board President Patrick Gallagher said community support makes all the difference. “We are part of the community, and we were started by the community. The continued support gives us the flexibility to do the work the community entrusted to us 50 years ago, because all of our neighbors matter.”

More information is at respondnow.org. 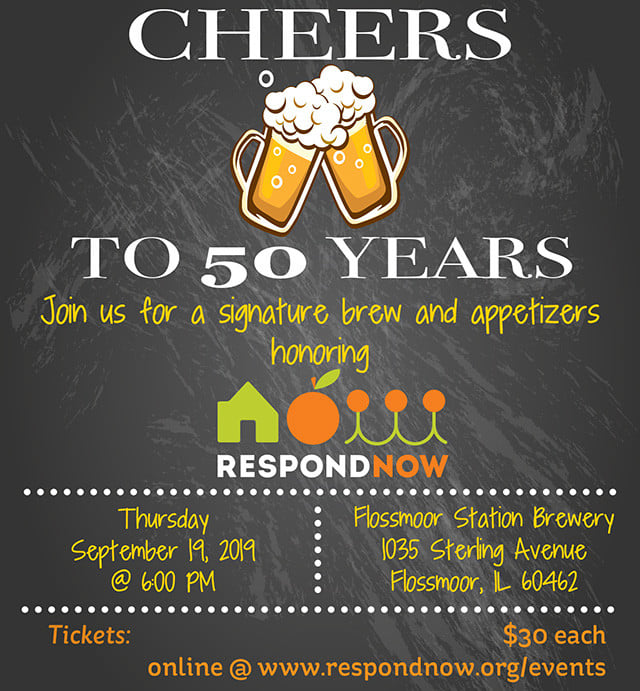