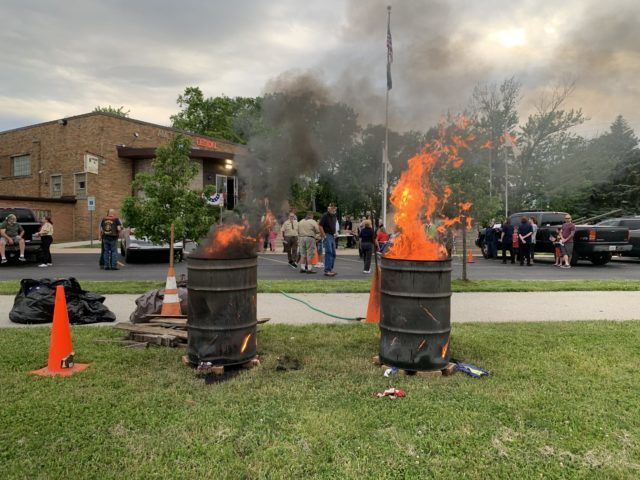 The ceremony started at 7pm and was organized by Sandi Gangolf, former president of American Legion Unit 697 Auxiliary. Surrounded by other American Legion supporters and members, Gangolf gave a short welcome on the front steps of the Legion building. Those in attendance were invited to join in the Pledge of Allegiance.

Village Trustee Mike Fish made some comments on behalf of the Village saying, “Thanks to the American Legion members that have joined us, as well as all the veterans, men and women, for bringing us together as a community to affirm our love and loyalty to this country and values for which it stands.”

Boy Scout Troop 276, which is charted by the American Legion Unit 697, provided a flag-folding demonstration as Scoutmaster Chris Jacobson read the significance of each fold:

The poem “I am the Flag,” written by Howard Schnauber, was read in parts by members of different Legion organizations and others closely related to the Legion.

American flags were then burned in large metal drums in the field adjacent to the Legion building. A handful of large garbage bags full of flags were burned at the ceremony, many of which had been taken out of the flag donation bins located at both the north and south end of the Legion building. Gangolf’s husband and VFW Commander Bert Gangolf oversaw the ongoing flag burning throughout the evening.

Although flag burning is often thought to be a negative demonstration, when done properly and respectfully, it is the proper way to dispose of retired American flags. The United States Code says: “The flag, when it is in such condition that it is no longer a fitting emblem for display, should be destroyed in a dignified way, preferably by burning.”

In 1937, the National Convention of the American Legion adopted burning as the “official ceremony for the destruction of unserviceable American Flags.” In 1944, the organization resolved that Flag Day, June 14, “be recommended as the most appropriate day on which to annually hold this ceremony.”

Gangolf and others involved in the ceremony hope to make flag-burning an annual occurrence in Lansing.

The American Legion building is located at 18255 Grant Street. Old mailboxes serve as flag retirement boxes on the north and south side of the building and are available all year long.