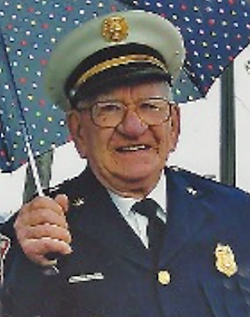 Friends may visit with Frank’s family on Sunday, June 9, 2019, at the Schroeder-Lauer Funeral Home, 3227 Ridge Road, Lansing, Illinois from 3:00 to 7:00 PM. Funeral Services will be held on Monday, June 10, 2019 at the funeral home, beginning with 9:30 AM closing prayers, then proceeding to St. Ann Catholic Church, 3010 Ridge Road for a 10:00 AM Mass of Christian Burial with Father Mark Kalema officiating. Frank will be laid to rest at Holy Cross Cemetery, Calumet City, Illinois.

Frank was part of the greatest generation. He served in the Army during WWII as Island Defense of the Hawaiian Islands. Frank was discharged from the Army as a decorated Master Sergeant. After the war, Frank worked at the chemical laboratory of ARCO in the Harvey, IL, facility as well as a volunteer fireman for the Village of Lansing. When Frank retired from ARCO he found his passion as not just a fireman, but one of the founding members of the EMT program for the Village of Lansing. Frank’s dedication to the welfare of the citizens of Lansing helped save countless lives in the Village of Lansing since the mid-1970s. Frank was a member of St. Ann’s Church since the early 1950s and served as an usher until 2016. Special thanks to the Cox/Hager family for all their love and assistance. Frank will be greatly missed by all who knew him.

In lieu of flowers memorial donations may be made in Frank’s name to the Lansing Paramedics or Unity Hospice, 600 W. Cermak Road, Suite 3D, Chicago, Illinois 60616.