LANSING, Ill. (May 29, 2019) – At the May 7, 2019, Village Board meeting, Firefighter John Grady was sworn in as the Lansing Fire Department’s second Deputy Chief, returning to a fire department administration that includes two assistants to the chief. Deputy Chief Mike Templeman currently serves and has served as Deputy Fire Chief since 2015. He has been in charge of day-to-day operations, equipment, and EMS.

According to Fire Chief Chad Kooyenga, Templeman plans to retire mid-summer, but Deputy Chief Grady ‘s appointment, was not effected to take Templeman’s place. Instead, the Lansing Fire Department intends to maintain two Deputy Fire Chiefs, one for operations, fulfilling duties that Templeman currently fulfills, and one for training, for which Grady was hired.

Lansing Fire Chief Chad Kooyenga believes that a return to two deputy chiefs will fill in all the gaps for any weaknesses in training. 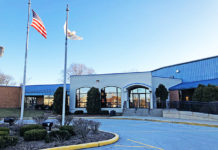