LANSING, Ill. (May 26, 2019) – The skies were gray and the weather was balmy as more than 200 people of all ages gathered around Ford Hangar today to observe and take part in the 27th Lansing Memorial Day Service on Sunday.

“I hope all of you have umbrellas, and that you won’t need to use them,” said Rich Dominiak, the organizer of the service and Coordinator of the Lansing Veterans Memorial Ceremonial Honor Guard, as he welcomed everyone to the event.

Dominiak began the service by reading a quote from President Dwight D. Eisenhower, which he said was still relevant today. The passage was written by Eisenhower while he was the Supreme Commander of the Allied Expeditionary Forces during World War II, on the day those forces invaded Normandy, France, in 1944.

“‘The eyes of the world are upon you,’” Dominiak read. “‘The hopes and prayers of liberty-loving people everywhere go with you. …Your task will not be an easy one.’”

June 6, 2019, will mark the 75th anniversary of the Invasion of Normandy. Additionally, March 15 marked the 100th anniversary of the creation of the American Legion. Lansing was given a commemorative flag to fly over the Veterans Memorial for its participation in the centennial celebration, and it flew beneath the stars and stripes throughout the service.

After Dominiak’s opening remarks and the singing of the national anthem, Paul Orich of Woodmen of the World led the crowd in the Pledge of Allegiance. Honor guard member Jeff Schoettle was then invited to speak, and he reminded everyone what Memorial Day is all about.

“As we go about our daily lives, we must never forget that our countrymen are still serving, still fighting, and still putting their lives on the line for all of us,” Schoettle said. “On this Memorial Day, and every day…let it be our task, every single one of us, to honor the strength and the resolve and the love these brave Americans felt for each other and for our country.”

Guest speaker Bob Graham, the commander of American Legion Post 330 in Calumet City, then gave a brief history of the American Legion to honor its centennial anniversary.

“We are here to honor our brothers and sisters that have given their lives to defend this country in her time of need,” Graham said in conclusion. “It’s sad to say that our efforts are not over by a long run. Let’s keep our fellow brothers and sisters in the U.S. military in our thoughts and prayers.”

Following Graham’s remarks, members of the honor guard stood in two lines with large flags to provide a path to the memorial for those leaving wreaths. Residents and organizations placed wreaths against the polished black marble, some honoring all fallen soldiers, others honoring family members. Boy Scout Troop #246 then honored the fallen by solemnly marching to the memorial with casket flags.

After a prayer by Rev. David Pavlik of St. Victor Church and Our Lady of Knock in Calumet City, the honor guard lowered the flags at the memorial, and the rifle squad performed the customary 21-gun salute. Honor guard member Neil Vanhuizen played “Taps” on his trumpet as the crowd looked on.

In closing, Dominiak thanked everyone for attending and told a brief story of his late uncle, a Word War II veteran who was a prisoner of war for 13 months. Dominiak urged the crowd to never forget the sacrifices made by men and women in the military who weren’t lucky enough to live past 80, as his uncle did.

“We came here to remember,” Dominiak said. “And, weather pending, you all showed up to remember.”

As the service ended and people walked to the memorial wall to read the names of Lansing’s fallen, not a drop of rain fell. 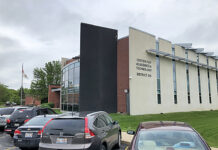