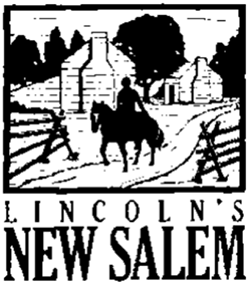 PETERSBURG, Ill. (May 13, 2019) – New Salem State Historic Site will host a public open house event Saturday, May 18, to celebrate the centennial of the state’s acquisition of New Salem, Abraham Lincoln’s home from 1831–1837.

The event will run from 10:00 a.m. until 4:00 p.m. and will include all of the site’s log buildings, many of which will be hosted by interpreters in period clothing. The open house event will provide a unique opportunity to enter some areas at Lincoln’s New Salem not often open to the public.

There is no admission fee to the site, but donations are accepted and appreciated. All donations are used for repair and maintenance of the historic village.

The site was acquired April 3, 1919, by Governor Frank Lowden when he signed a bill passed unanimously by the Illinois General Assembly “to acquire by donation, the title to the land formerly constituting the site of town of New Salem (the home of Abraham Lincoln 1831-1837) and land contiguous thereto, now the property of the Old Salem Chautauqua Association, comprising sixty–two (62) acres more or less…. The land so acquired shall be set aside as a State park, to be known as the ‘Old Salem State Park’ and shall never be devoted to any other use.”

The second section of the bill gave six directives to the then Department of Public Works and Buildings, including “Complete the restoration of, as far as possible, all buildings which were standing thereon during the time that Abraham Lincoln resided in the town of New Salem.”

On May 22, 1919, the Department took the first steps in executing its directives when the Old Salem Chautauqua Association deeded those 62 acres to the State of Illinois for the consideration of $1.

One hundred years later, Lincoln’s New Salem State Historic Site is still thriving, receiving hundreds of thousands of visitors each year. The site’s acreage has increased from 62 acres to more than 750 acres.