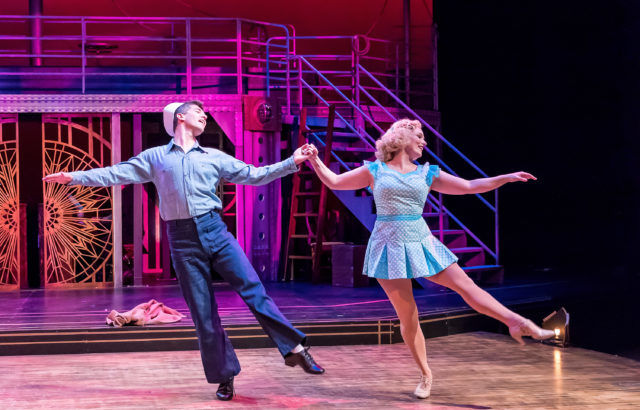 MUNSTER, Ind. (May 11, 2019) – In what world does a young girl from Centreville, Utah, arrive in New York to sing and tap dance her way into the starring role of a Broadway musical—all in the span of 24 hours? Only in Dames at Sea.

A light-hearted musical replete with Broadway drama, tap dancing, and on-again-off-again love interests, Dames at Sea offers an indulgent yet wry look at a remarkable day in the life of a group of Broadway stalwarts and wannabes. Set in the early 1930s, the musical premiered in the 1960s and is a parody of the grandiose and formulaic movie-musicals popular in the ‘30s and following, many of which were directed or choreographed by Busby Berkeley. Involved in over 50 films and musicals from the 1930s to the ‘60s, Berkeley created hundreds of dance scenes of lavish and kaleidoscopic proportions.

Though Theatre at the Center’s Dames at Sea boasts only six actors and a small handful of musicians, the musical offers an accurate flavor of Berkeley’s conventions, simultaneously basking in his style’s extravagance while poking fun at its playful absurdity.

A Broadway musical, set to sea

The musical opens upon the rehearsing broadway star Mona Kent (Colette Todd), whose gloriously vain personality is almost as ostentatious as the red plumage on her hat. Kent is slated to perform the starring role in “Dames at Sea,” a tap-dancing musical directed, produced, and managed by the perpetually frazzled Hennesey (Steven Strafford). Young and naive Ruby (Kelly Felthous) soon enters the scene and dazzles with her tap dance moves, and is hired by Hennesey to join the show soon after. Befriended by the sharp-witted but kind chorus girl Joan (Sierra Schnack), Ruby quickly falls for Dick (Todd Aulwurm), a sailor with aspirations for songwriting grandeur. But the building excitement for opening night quickly sinks as Hennesey reveals that the theatre is being torn down, and the group must use its “the show must go on” energy to find an alternate venue.

Dames at Sea moves quickly through its plot points to get to its musical numbers, a trait that will delight fans of lighthearted and perky tap-dancery while leaving more plot-hungry viewers feeling a bit lost at sea. One of the biggest plot devices of the show, in fact, is the flickering relationship between Ruby and Dick. When the two meet, their attraction is so strong as to merit a time-stopping duet (“It’s You”) where they proclaim their mutual affection for one another. Later, when Dick realizes being chummy with Mona Kent might be a boon to seeing his songwriting aspirations realized, Ruby is heartbroken, and must be wooed back into love by Dick. Dick finds himself in this position multiple times throughout the show but deftly maneuvers back into Ruby’s good graces with a quick proclamation (either spoken or sung) of his love. It’s a plot device that, by the end of the show, feels tired and might leave some in the audience contemplating the expendable nature of a love that changes as quickly as the tides.

Then again, Dames at Sea was never intended to offer a Pulitzer-winning story—it was written to parody the conventions of a popular genre at the time that used plot only as a trite string to tie together beautifully sung and choreographed dance numbers. Most viewers will find it less-than-believable that a girl from Utah can become a Broadway star in 24 hours or that an opening night performance can be moved from a traditional theater to a Navy ship after only a sultry duet between the captain and his former flame. But that’s part of the point—a large part of the show’s parody is in the extreme far-fetchedness of its plot.

Although the musical remains an amusing pastiche of an entertainment era long past, not all of the jokes and references have remained afloat for modern audiences. Punch lines of a musical premiered in the 1960s that satirizes conventions of the 1930s are bound to lose some of their punch, a reality that shows itself in Dames at Sea. Some of the musical’s innuendos, for example (and there are many of them), risk falling flat due to a historic vernacular, while others illustrate sexual realities that have changed over the decades. These era-sensitive facets of Dames at Sea leave enough uncertainties for today’s audiences that the musical risks losing the once-poignant jabs that compose its parody.

None of these considerations, however, distract from the buoyant performances offered at the Theatre at the Center, all of which were impressive from an acting, dancing, and vocal perspective. Felthous’ feet pattered across the stage with impressive ease, and her vocal timbre matched her energetic and youthful character perfectly. Colette Todd as Mona Kent, and Strafford as both Hennessey and the Captain, both put their full vocal range on a beautiful display, especially in their sexually-reminiscent duet “The Beguine.” Aulwurm’s charm easily wins over the audience, as does his sailor friend Lucky’s (Sam Shankman) air-headedness, and Schnack as the talented, cunning, and friendly Joan anchors some of the show’s more flighty characters.

Besides its laugh lines, Dames at Sea has its share of other smile-inducing moments, including dancing “buildings” and umbrella-twirling cast members who comically punctuate Ruby’s otherwise somber “Raining in My Heart.” Additionally, the set served well as both a theatre stage in the first act and a Navy battleship in the second. The lighting provides a red compliment to Mona Kent’s passion and vanity, offers a cool blue to illustrate Ruby’s fresh innocence, and transitions to pink as she sings “There’s Something about You” to her growing love interest, Dick. Though easy to overlook, the tap dancing skill of the cast is sublime, adding some thrilling audible and visual elements to many of the songs.

Though perhaps somewhat tossed about by the waves of its own age, Theatre at the Center’s Dames at Sea offers an undeniably fun voyage through the lives of larger-than-life Broadway personalities, plucking at heart strings and tickling funny bones along the way.

The show runs through June 2. Performances are:

*Kelly Felthous will play Ruby from through May 19. Ashley Lanyon will take over the role May 22–June 2.