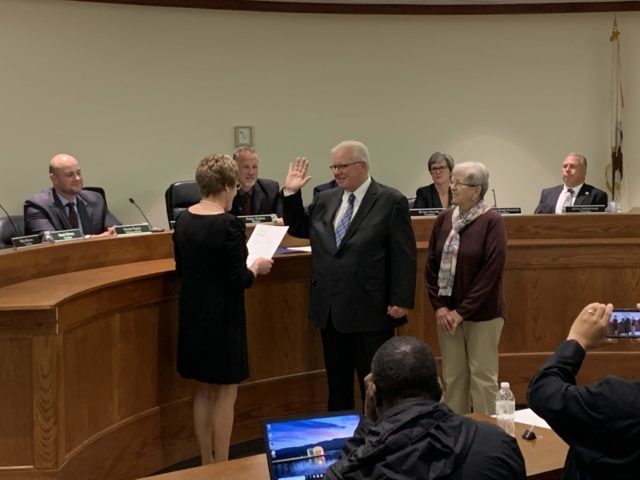 LANSING, Ill. (May 8, 2019) – Saad Abbasy, Mike Fish, and Jerry Zeldenrust were sworn in as Village Trustees during Tuesday night’s Village Board meeting, replacing Anthony DeLaurentis and Mike Skrbina. Zeldenrust retained his seat on the Village Board.

After concluding its normal business on Tuesday, the Village Board of Trustees adjourned “sine die,” a Latin phrase which literally means “without a day.” Governing bodies adjourn sine die when a particular assemblage is not scheduled to meet again with the same membership.

Immediately after this special adjournment, Mayor Patty Eidam recognized both DeLaurentis and Skrbina, and allowed both of them to speak.

DeLaurentis shared some personal reflections on his 16 years as a Village Trustee, saying “I’ve had the honor to sit up here as a trustee under three different mayors and I appreciate that. I’ve had the opportunity to work with some great people on the Board, attorneys, clerks, our Village Administrator, and our department heads.”

DeLaurentis has also served on the Planning and Zoning Board and is the current president of the Lansing Historical Society. He remembered having to schedule family vacations around board meetings and thanked his wife and family for their support over the years. He also admitted that he will miss being a trustee but will enjoy more free time to pursue his interests. The long-time trustee ended his speech by jokingly offering to “do public speaking at $5,000 a session.”

Mike Skrbina has been a trustee on the Village Board for eight years, most recently being the chairman of the Public Works Committee. Skrbina said he would miss being a part of the Board, and reflected on how quickly time seems to go by as he has gotten older.

Earlier in the meeting, Trustee Mike Manno had mentioned that he would miss Skrbina’s Lifesaver mints, which he handed out every meeting. During his remarks, Skrbina pulled out large bags of lifesavers and distributed them among the Village Board, drawing laughs from everyone in the room.

The Mayor then presented both men with awards for their service as well as personalized Village of Lansing jackets.

Following the recognition of the outgoing trustees, the Mayor called each of the incoming trustees and their wives forward, swore them in, and invited each to give a short speech. Mike Fish was sworn in first and thanked those who had voted for him and worked on his behalf during the election.

“This has been a dream of mine for over forty years but due to my job I could not fulfill this position,” said Fish, who was a Public Works employee prior to his retirement.

He ended his comments by promising to be the “voice of the people.” “If you’ve got something to say, come say it to me,” he said, “that’s what I’m here for.”

Saad Abbasy was the next trustee to be sworn in and was joined by his wife and two children. Abbasy was appointed by Mayor Eidam to the Planning and Zoning Board in Lansing but has forfeited that position now that he has been elected to Village Trustee.

“I’m overwhelmed with joy and excitement. This really is a lifelong dream of mine,” Abbasy said before thanking his supporters and family.

Abbasy shared that his parents first moved his family to Lansing in 1991, and were drawn by the town’s “thriving community.” He said, “as we grew up through grade school, middle school, and high school, what [my parents] got was a village that came around myself and my siblings to help bring us up. And this is my opportunity to give back to this community for what it put into me.”

Jerry Zeldenrust was the final trustee to be sworn in. Zeldenrust has been a Village Trustee for two years, and was appointed by Mayor Eidam to fill her vacant trustee seat when she was elected mayor in 2017.

Zeldenrust shared some of his experiences as a trustee, acknowledging each department head by name and calling it a “true privilege to serve with this kind of group.” He ended his remarks by saying, “I look forward to the next four years as your trustee and being committed to doing the homework that has been the example set for me to do.”

After the speeches were finished, Mayor Eidam called the Village Board to order to announce the committee assignments for the trustees. The assignments are listed below. The meeting was then adjourned. The Committee of the Whole did not hold a meeting on Tuesday.

Lansing Neighborhood Network, IT and ADA

All residents are welcome to attend Village Board meetings and Committee of the Whole meetings. The meetings typically begin at 7:00pm on the first and third Tuesdays of the month at the Municipal Court Complex (Lansing Police Department), 2710 170th Street.

Google ads help us too!