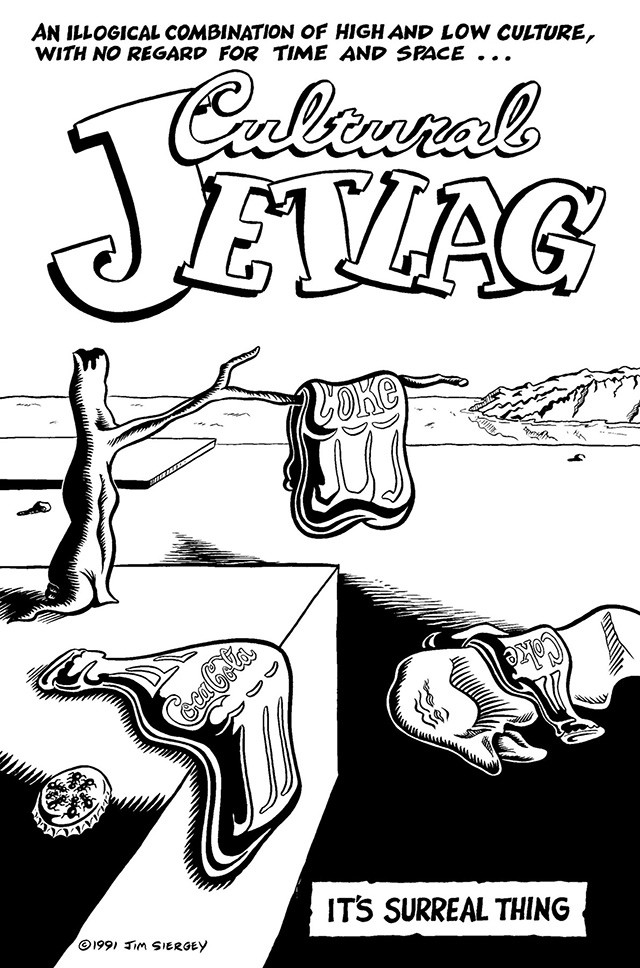 HAMMOND, Ind. (May 3, 2019) – Cultural Jet Lag, an exhibit featuring the works of artists Jim Siergey and John Anthony Giemzik III—two players in the underground art scene for over two decades—opens at Paul Henry’s Art Gallery in Hammond on May 18 and 19.

Siergey’s art has been described as an illogical combination of high and low culture with no regard for time and space, while Giemzik’s self-taught, urban-organic style creates complex, whimsical, and thought-provoking work.

Two public opening receptions are planned for the May 18-19 weekend:

The exhibit continues through June 30.

Jim Siergey was already active in the underground and alternative comix world since the 1970s. (Wikipedia distinguishes comix from comics in their entry defining “Underground comix” as “small press or self-published comic books which are often socially relevant or satirical in nature. They differ from mainstream comics in depicting content forbidden to mainstream publications by the Comics Code Authority.”) He met Tom Roberts in the 1980s in an animation class at Chicago’s Columbia College. They found they had a penchant for meshing what was considered high culture with low culture—and Cultural Jet Lag was born.

The first Cultural Jet Lag comix strip appeared in New City, a Chicago weekly newspaper, in 1990. Cultural Jet Lag went on to appear in over 150 alternative publications across the country.

A separate Cultural Jet Lag was created for Time Magazine, where it ran as a regular feature for more than four years. A composition of Cultural Jet Lag comix appeared in the Sunday magazine supplement of USA Weekend, and two comic book compilations also followed.

Tom Roberts had muscular dystrophy and passed away in 1999 at the age of 39. Siergey continued the strip for another decade or so before retiring it.

Growing up, John Anthony Giemzik III was fueled by his fascination with 1970s underground comic books and would doodle on everything: textbook margins, the backside of envelopes, and bathroom stalls were all fair game. Twenty-five years later, his once meaningless doodles have maintained a timeless appeal with a delightfully bizarre approach. Pure imagination is always relevant…as Giemzik assigns a crammed, clamoring grab of faces to the human condition within the crowd surrounding us.

Paul Henry’s Art Gallery is located at 416 Sibley Street in downtown Hammond, Indiana. For more information about the gallery, call David Mueller at 219-678-5015. Free parking is available in the lot directly behind the gallery between Sibley and Fayette Streets.