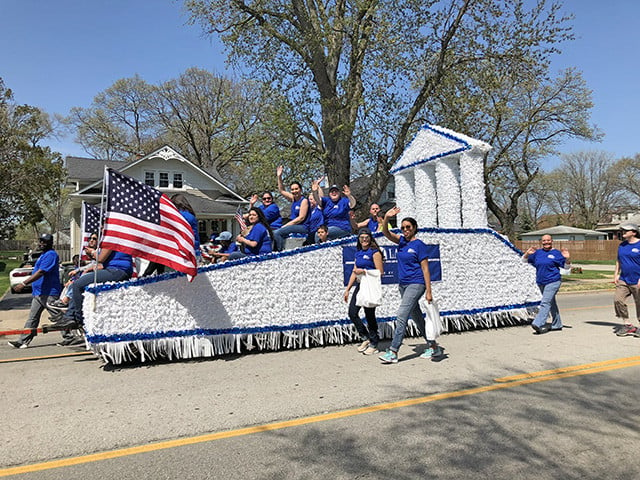 LANSING, Ill. (April 28, 2019) – Depending on the weather on Saturday, May 4, thousands of people will line Lansing’s main streets to view the 52nd annual Good Neighbor Day parade, which will comprise entries from more than 70 organizations. For viewers, the parade may seem simple—everyone just drives slowly or walks down Ridge Road, right? But making it look simple requires a lot of planning and attention to detail.

The parade is a function of the Lansing Area Chamber of Commerce, and the Chamber Board of Directors chooses a theme each year with input from residents and businesses. They try to find a theme that is “fun and easy to decorate to,” says Chamber Director Amy Todd, so as many entries as possible can find a way to participate.

This year’s theme—May the 4th Be With You—was suggested by LNN Assistant Station Manager and Star Wars fan David Boomker. The Chamber Board had already approved a different theme, but recognizing that a Star Wars theme would be fun for a variety of groups, and that May the 4th would not fall on a Saturday again until 2024, the Board accepted Boomker’s suggestion and changed their plans.

Parade participation is open to anyone—Chamber members can participate for free, and non-Chamber members pay just $50. All participants must complete a registration form providing information that helps the Chamber plan the parade. For example, the form asks if the entry is a float, band, decorated car, or walking group—this helps determine how much space the entry will need when lining up on Wentworth before the parade. The form asks if the entry will have music—which helps the organizers put enough space between the musical entries so they aren’t competing with each other. The form also asks for the number of participants in each entry—because a hot dog lunch is provided by the Lansing Lions and the Lansing Junior Women’s Club, and they need to know how many to prepare. And the form provides a place for the organization to describe themselves or their entry. This description is then read by the parade announcer and is included in the video of the event.

Around 8:00am on the morning of parade day, Todd and other members of the Chamber Board can be found on Wentworth Avenue with a cache of 100 numbered wooden stakes. The numbers correspond with parade entries, and Board members pound the stakes into the ground to designate where each entry should line up, using the measurements provided on the registration forms.

Parade protocol puts government agencies and the American Legion at the front of the parade, followed by the Lansing Lions and Lansing Junior Women’s Club, who need to finish first in order to prepare lunch for the others. The rest of the line-up is based on the order that registration forms are completed and returned. Registration opens already in February, and experienced participants who like to be at the beginning of the parade, return their forms immediately to reserve their spot.

The Good Neighbor Day Parade is about businesses as well as residents, and Todd encourages every entry to give out something. Candy is popular among recipients, as are high-value coupons, and other specialty items—magnets, jar openers, chip clips—can keep a business name in front of consumers long after parade day.

The normal parade route is Wentworth, Ridge Road, Torrence, but this year may require some flexibility if construction makes that section of Torrence inaccessible. Since Torrence is a state road, and the state doesn’t always reveal their plans ahead of time, Todd has worked closely with the Lansing Police Department to come up with an alternate route that can be implemented at the last minute if necessary. “We couldn’t do the parade without their help,” said Todd about LPD.