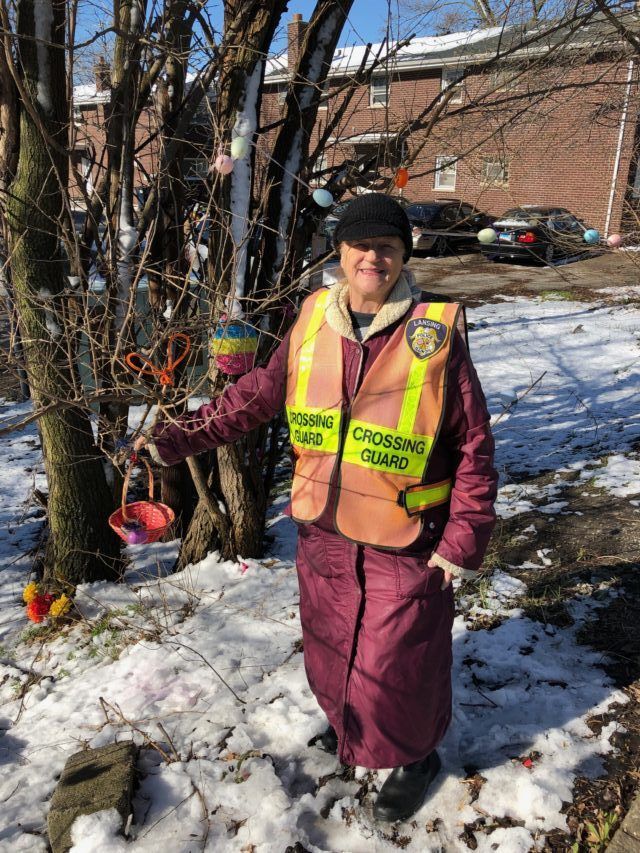 LANSING, Ill. (April 15, 2019) – At first glance, the plastic Easter baskets and strings of Easter eggs adorning the tree branches near the railroad crossing on Ridge Road just west of Torrence may look like debris. However, a closer look reveals them to be lighthearted, colorful decorations put there by a well-known crossing guard.

Marjorie Balkis, 72, has lived in Lansing for about 20 years and has been a crossing guard since last April. In that single year of service, she’s managed to make quite a name for herself around town, attracting social media attention and gifts from passers-by.

“One person gave me a folding chair, and someone gave me a shovel. For Valentine’s day I got three big hearts from people. A lady gave me hot chocolate yesterday,” Balkis said with an almost awestruck smile. “I got a hat and a scarf and slippers. I never got so many gifts in my life!”

Balkis works mornings on school days from 7:00am to about 9:00, she said. During those hours, she helps children safely cross over the train tracks on their way to school and maintains her eye-catching intersection. She decorates for every holiday, careful not to break any tree branches. When there’s snow, she shovels. When someone throws trash out the window of their car, she picks it up. She even sweeps stones off the sidewalk to keep it looking tidy. No single thing inspired her to start this maintenance and decoration, Balkis said—she just likes doing it.

“It makes me feel good that people like it,” she said. “And I like to do it anyway, whether people thank me or not. And if it brightens up just one person’s day, well, then it’s all worth it. You don’t know, sometimes, if people just lost a family member or they’re not happy. And maybe just looking at this will make them smile.”

“It’s kept me healthy and strong for sure,” Balkis said.

As much as she loves her job, Balkis said the hardest part of it is not being able to contact and thank the people who have given her gifts during her year of service.

“I wish I knew their names,” Balkis said. “I wish I could send them a card. Because they just come by here and say, ‘Thank you,’ and they’re gone. …I want to especially thank them for being so kind to me.”

While some days can be challenging—usually when children try to run in front of cars or when drivers ignore the nearby stop signs—Balkis said she loves meeting people who cross her intersection. And she’s already thinking ahead to what her Mother’s Day decorations will be.

“I just don’t know,” Balkis said with a grin. “Maybe lots of flowers.”