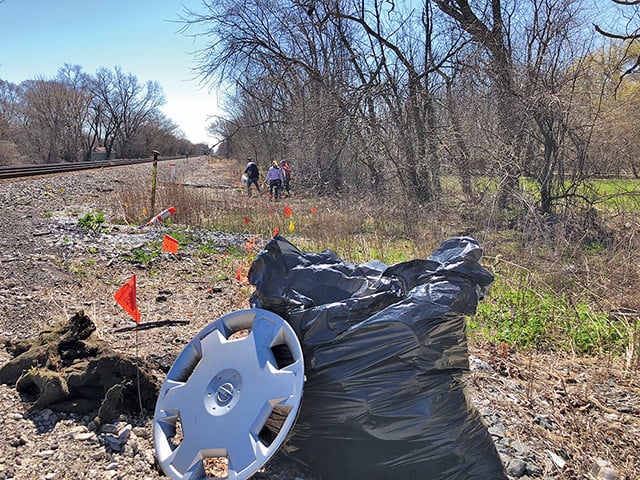 LANSING, Ill. (April 5, 2019) – On the last Saturday of April, Lansing residents will come together to participate in the village’s annual Community Clean-Up Day. The event, celebrating its tenth year, focuses not only on beautifying our town, but also on promoting camaraderie.

Village Clerk Vivian Payne said that two major goals of Community Clean-Up Day are “picking up as much garbage as we can and getting all of the different organizations together afterwards.” Last year, more than 300 volunteers from different churches, businesses, schools, and Scout programs participated.

Inspiration for Community Clean-Up Day came to Payne while she was driving around Lansing. “After the winter, it’s pretty obvious how much garbage is out there, and it doesn’t get cleaned up during the wintertime,” she said. “When I started working for Mayor Abbott, I thought it would be a great event to bring people together.”

Unfortunately, there are several areas around town that seem to suffer more than others in terms of littering. The worst offenders, according to Payne, are around railroad tracks, the old K-mart location, and the Torrence Avenue overpass.

“Even though that’s IDOT’s property, they rarely send IDOT personnel out there to clean it up,” Payne said regarding the overpass. “We make it a point to clean it ourselves just because it’s where everybody gets off and that’s their first impression of Lansing.”

In fact, the village cleans the area several times throughout the year; Public Works volunteers assist in the process. The goal is to encourage residents and commuters alike to keep the streets free of trash.

“When you’re driving through a community that’s clean, you’re going to think twice about throwing something out the window,” Payne explained.

Not only do these efforts keep our streets clean, they also attract potential new business developers or families. Payne said that a clean community is one of the things developers look for when investing their time and money. As for families, cleanliness is a top priority, among good schools and low crime rates.

“When folks are driving around, looking to possibly purchase a home in Lansing, that’s obviously one of the things they look at,” Payne said. “They’re going to look at how clean a community is.”

This year, the village is using a new slogan to help promote Community Clean-Up Day: “Two Hands, Two Hours.” As the name indicates, the clean-up has always been a two-hour effort. And, as Payne said, “It just take two hands and two hours to make a difference in the community.”

The day will begin at the Village Municipal Center, where volunteers will pick up garbage bags and lunch tickets. (Volunteers will be treated to a free barbecue luncheon after the clean-up, sponsored by the village.) After picking up supplies, volunteers meet their teams at their pre-assigned clean-up locations and get to work. The clean-up is strategically timed to coincide with another one of Lansing’s community-wide traditions: the Good Neighbor Day Parade.

Community Clean-Up Day 2019 will take place on April 27, from 10:00am– 12:00 noon. Volunteer information and sign-ups can be found on the village’s website, under the Clerk’s tab. Interested parties may also contact Vivian Payne directly at 708-895-7207 or at [email protected].