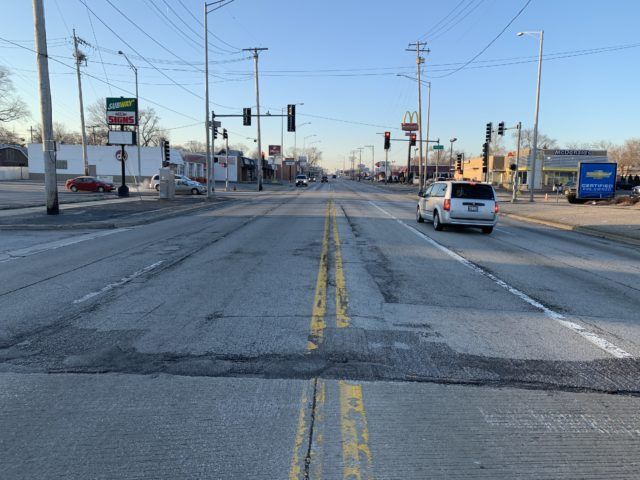 LANSING Ill. (March 23, 2019) – Torrence Avenue will be resurfaced this summer, starting a project that will stretch from 178th Street in Lansing 3.4 miles south to Glenwood-Dyer Road in Lynwood. Scheduled to begin in May and continue through the end of August, the project will replace the current layer of asphalt on the heavily used road.

Torrence Avenue will not close entirely during this period, but will experience frequent lane closures to accommodate the work. Travel north and south on the road will always be possible—though likely not as efficient—and businesses and residences along the road will be accessible.

The northern edge of the project will start just north of 178th street, the intersection that is shared by McDonald’s on the southwest and Jiffy Lube on the southeast. This location is where the concrete road that leads up to the 80-94 interchange ends and the asphalt road begins.

Although the street work is scheduled to start on May 1, preparations will likely start in April, as the weather allows. Such preparations include tree root removal and curb removal in areas where the curbs are in poor condition. The projected end date for the work is August 30, though prolonged bad weather may cause delays.

The following animation provides a visual for the span of the project:

Village Communications Director Ken Reynolds is excited about the long-term benefits of the project, despite the traffic complications it will cause this summer. He called the lane closures “an inconvenience,” saying “there’s no way to sugarcoat it.” But ultimately, he said, “It’s great news…. The greater good is being massively served here.”

Part of that greater good for Lansing is the fact that the Village will not have to pay anything for the work being done. Torrence Avenue is part of Illinois State Route 83, which stretches from Lynwood 92 miles north to the Wisconsin border. The route is maintained by the Illinois Department of Transportation (IDOT) which means any snow plowing, patching, or resurfacing that is needed on any part of the road is IDOT’s responsibility. The project will cost the state of Illinois nearly $1.9 million.

When Jeff Pintar, the Village Engineer from Robinson Engineering, brought news of this project to the Village Board of Trustees on March 5, one of the first questions asked was if the businesses along Torrence would be notified. Pintar explained that businesses will be notified informally, likely by a knock on the door on the morning that work will take place. IDOT is not required to notify residents of any closures. The only instance where drivers would not be able to access a business or residential driveway is if construction is being done on the curb or road directly in front of that driveway. This work would last no longer than a few hours before the driveway is opened up again.

According to Pintar, street resurfacing is part of the standard maintenance of a road and is different from replacing a road entirely. It has been well over a decade since Torrence Avenue was reconstructed to this degree. A newly resurfaced street is intended to last for 10 years, says Pintar.

The process of resurfacing the road begins by removing any invasive tree roots and damaged curbs. Next, the top few inches of the road are removed by grinding away the current layers of asphalt. Any road damage that still remains after the asphalt is removed will be cut away down to the stone base and replaced. Height adjustments will then be made to any manhole covers or drains that need it. At this point, curbs will be replaced, and most likely two layers of asphalt will be laid. The striping of lanes will take place once the road itself is finished. New sidewalk crossings will also be constructed to meet ADA (Americans with Disabilities Act) requirements.

During this process, one lane of traffic will always be open going in either direction. Farther south where the street becomes only two lanes, a traffic flagger will be present to regulate the flow of vehicles while resurfacing takes place. It is not yet known where work will begin on the 3.4 mile stretch of road. All work will take place during daylight hours, meaning no noise or nighttime safety issues will be of concern to residents.

Residents are encouraged to take extra precaution while driving through the work zones, as workers, slow-moving trucks, and other potential hazards will be in the roadway. It is not yet known what the speed limit will be in work zone areas, but this information will be posted alongside the roadway when the work starts. During the work period, traffic lights will be triggered by timers instead of detectors in the road, causing longer red lights for drivers.

Reynolds said the Village will work with the Lansing Police Department to communicate as much relevant information about the resurfacing as possible to residents, including potential alternate routes that avoid Torrence. He anticipates more traffic will use 170th Street, Burnham Avenue, Wentworth Avenue, and frontage roads along the expressway.

Pintar expressed a similar sentiment and warned motorists against speeding through residential areas: “We don’t want cars that take Torrence Avenue on a daily basis finding a new alternate route through a subdivision. That’s the last thing we want.”

Appreciating the forest, not the trees

As preparation work begins later this month and residents start expecting delays in the near future, Reynolds hopes motorists will have patience. He said, “I hope the residents keep the old ‘forest for the trees’ thing in mind and know that what they’re going to have at the end [of the project] is going to be a major, major road in our town that’s going to be completely resurfaced.”

As the start date for the project draws closer, more information is expected to be released, including a press release from IDOT.