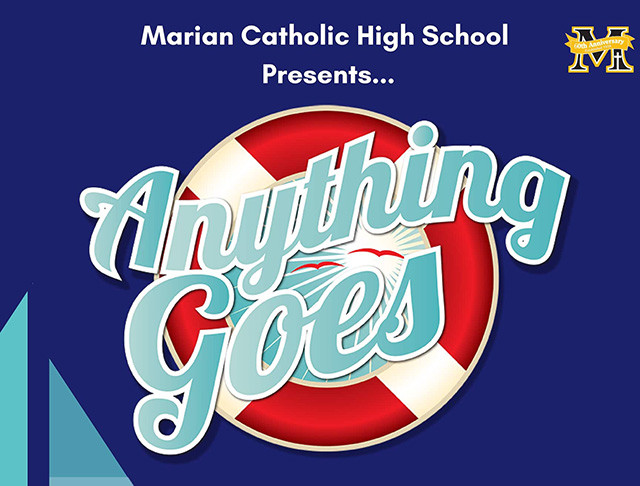 CHICAGO HEIGHTS, Ill. (March 29, 2019) – Music, dance, laughs, and the age-old tale of Boy Meets Girl—no musical puts it on stage better than Anything Goes, Cole Porter’s classic 1930’s musical. A hilarious shipboard romp, wrapped around one of Cole Porter’s most magical scores, the story has remained an audience favorite, playing to Off Broadway audiences in 1962, then returning to Broadway in 1987 and 2011. Performances at Marian Catholic High School will run April 12-14 in the Monsignor Croarkin Auditorium at Marian Catholic.

Anything Goes introduced several songs into the American musical lexicon, such as “Anything Goes,” “It’s De-Lovely,” “Friendship,” “You’re the Top,” “Blow, Gabriel, Blow,” and “I Get a Kick Out of You.”

Anything Goes is presented through special arrangements with TAMS-WITMARK. All authorized performance materials are also supplied by TAMS-WITMARK, www.tamswitmark.com.