LANSING, Ill. (March 28, 2019) – At the March 19 Village Board meeting, the Lansing Fire Department received official approval to purchase a new custom-designed E-ONE fire engine through Fire Services, Inc., of St. John, Indiana. The approval was the culmination of eight months of careful research and design.

The committee spent the next four months meeting with representatives from major fire engine manufacturers—Pierce, Spartan, Seagrave, E-ONE, Sutphen, and Ferarra—their goal being to custom design and secure the best possible fire engine within their $600,000 budget, while taking into account customer service, maintenance, and warranties.

After careful consideration of what each manufacturer had to offer, they chose E-ONE, a fire apparatus manufacturer in business since 1974 that recently signed a contract with the Chicago Fire Department to replace their engines, trucks, and towers for the next five years. E-ONE has manufacturing plants in Ocala, Florida, and Hamburg, New York. Lansing’s new pumper will be built at the New York location, and committee members will visit the plant once during the build, and then again for a pre-delivery inspection.

Fire Service, Inc., of St. John, IN, is both a dealer for E-ONE and also a fire apparatus service center. The Lansing Fire Department currently uses them for servicing some of their existing fleet. Working with Fire Service’s sales representative Matt Timmer, the Department Engine Committee originally planned to build a fire engine with an aluminum chassis rather than stainless steel in order to save approximately $25,000, but Timmer alerted them to a fortuitous opportunity to get a stainless steel chassis at half cost. Another fire department had pulled out of contract on a stainless steel body, and the Lansing Fire Department was offered the ready-made, more durable chassis, which came with a better warranty, and which would bump them up five months ahead in the manufacturing timetable. All things considered, it was an offer the Department Engine Committee could not refuse.

The new E-One design meets the Lansing fire fighters’ current needs for safety and efficiency with a number of differences from their current rigs. The hose bed has been lowered for safer and faster access. Also, because Lansing currently has fire hydrants every 380 feet, the engine’s water tank capacity could be dropped by 250 gallons. The committee eliminated excess equipment, tailoring the equipment to current crew numbers. They also designed the wheel base under 200 inches for easy turning on tight streets. These adjustments provide lighter, faster, more efficient service, and allow them to go with a 380 hp engine as opposed to the current 500 hp engines.

“This one I’m really happy with,” said Firefighter and committee member John Grady. “I was part of the build team for the truck, and I loved it—that’s my favorite vehicle to drive. I am so excited for this one. The look and the design kind of harkens back to the old New York-style pumpers like from the late eighties, early nineties—kind of lower, streamlined. So that’s kind of what we were looking for.”

The new E-ONE is scheduled for delivery in late October and will be housed at Fire Station #29 (formerly Station 3) at 19300 Burnham Avenue. It will replace the fire department’s current 1987 GMC conventional cab pumper, which eventually will be donated to either a rural fire department or one affected by disaster. 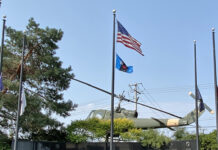