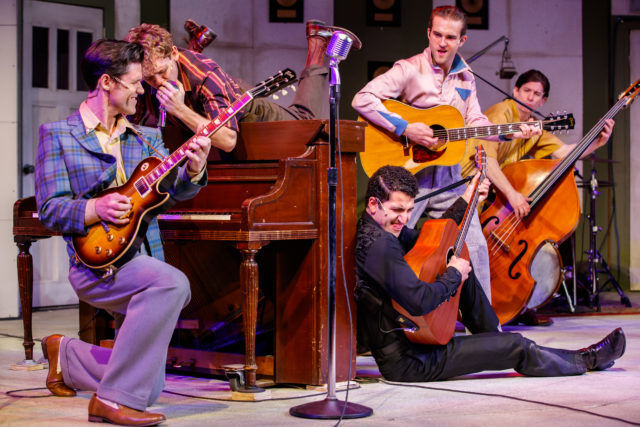 MUNSTER, Ind. (March 6, 2019) – The unmistakable sound of strumming guitars and trilling pianos is filling Theatre at the Center nowadays as four reincarnated rock-and-roll pioneers take to the stage and bring audiences back to the heyday of rock-and-roll.

The popular musical Million Dollar Quartet takes viewers on a journey to a small recording studio in Memphis on December 4, 1956, where Elvis Presley, Johnny Cash, Jerry Lee Lewis, and Carl Perkins played and sang their way into history. Replete with chart-topping hits, the musical serves as a showcase for the foursome’s greatest work through 1956, and includes Presley’s “That’s All Right,” Cash’s “Folsom Prison Blues,” Lewis’ “Great Balls of Fire,” and Perkins’ “Who Do You Love?”

Debuting in 2006, Million Dollar Quartet has appealed to nostalgic audiences across the country, making its Broadway run in 2010 and 2011, and becoming a stalwart of Chicago theatre at the Apollo Theatre in Lincoln Park for over seven years before closing in 2016. The Theatre at the Center—with its intimate thrust-style stage—provides a charming version of Colin Escott and Floyd Mutrux’s historically semi-accurate musical that is sure to delight.

Directed by William Underwood and Daryl Brooks, the show opens as the electric guitar-wielding Carl Perkins (Zachary Stevenson) begins his recording session at Sun Records, owned and proudly operated by Sam Phillips (Sean Fortunato), whose entrepreneurial desire to spread rock-and-roll music is only limited by his somewhat meager means to do so. The young piano-pounder Jerry Lee Lewis (Michael Kurowski) accompanies Perkins, and can’t help showing off his skills during Perkins’ session. Of the four musically talented actors, Stevenson and Kurowski are afforded the most opportunities to show off their talent throughout the show, Stevenson at one point strumming his guitar behind his back and Kurowski once playing the piano from atop it.

The musical is punctuated by small asides from Phillips, who literally steps through the fourth wall to explain his first interactions with the men and reveal his desires for them to sign or re-sign a contract with Sun Records. These moments drive the plot, and provide the needed tension and background to tie together what would otherwise be only a musical of talented guys hanging out and playing music.

As Johnny Cash (Tommy Malouf) and later Elvis (Zach Sorrow) enter the small studio and the foursome plays iconic songs together, the audience starts to understand how special that day must have been in Memphis in 1956. But nearly as special are the moments taking place in the theatre as a handful of talented actors, in complete mastery of their material, make feet tap and heads bob throughout the audience.

In addition to the four who delightfully evoke their characters through voice, dress, and mannerism, Fortunato plays a folksy, driven, and sympathetic Phillips. Aeriel Williams plays Elvis’s girlfriend Dyanne, and though her part is an unfortunately small one, she provides some of the most impressive music of the show, wielding a voice even more powerful than those of her male counterparts. The cast is rounded out nicely by Nick Anderson and Michael Sinclair who flawlessly play the percussionist and the bassist, respectively.

The admittedly thin plot thickens as Cash reveals that he intends to follow in Elvis’s footsteps and leave the fold of Sun Records for more promising distribution from a larger record label, lamenting, “If they wanna stop communism, they oughta let Sun distribute it.”

Amidst this and other tensions between the stars, the musical never loses its focus on what made the men famous in the first place: their music. Some theatre-goers may find this focus odd at first as little actually happens in the first act in particular. But the plot is thin by design, intended to showcase an impressive array of rock and roll music rather than tell a dramatic story.

Though each actor in the quartet is charming, Kurowski is particularly winsome as Lewis, whose wit is nearly as quick as his piano fingers. The Louisiana native who once found his rustic sensibilities in awe that “the outhouse was inside” is never one to miss an opportunity to upstage his fellow performers (both verbally and musically), providing a steady source of laughs throughout the show.

It’s Kurowski who leads the audience into a post-curtain call sing a-long, turning the Million Dollar Quartet into a Million Dollar Chorus. Pink lights flash at the standing audience and as voices cheer and hands clap, the musical turns into a concert—a fitting conclusion to a show whose chief purpose is bringing new life to old songs.

Though not always true to fact in its plot, Million Dollar Quartet provides a thoughtful, fun, and shoe-tapping look at a special day in the lives of four Rock-and-Roll Hall of Fame inductees. Ultimately, the musical is about the same thing as the four rock legends’ lives: making music. And while not everyone will agree with Sam Phillips that rock-and-roll “is where the soul of a man never dies,” for those of us who enjoy the timeless twang of an electric guitar and the driving rhythm of a wailing piano, Million Dollar Quartet is exactly what we need.

Theatre at the Center is located at 1040 Ridge Road in Munster, Indiana. For more information, visit www.TheatreAtTheCenter.com.