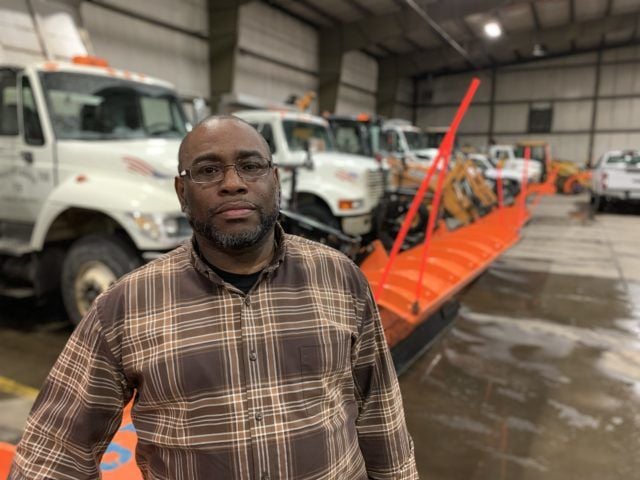 LANSING, Ill. (February 2, 2019) – As midnight drew near on Sunday, January 27, Gary Richardson couldn’t sleep. Snowfall had started in Lansing, and he knew by the time the Monday morning commute started, there would be a blanket of snow inches thick covering Lansing’s roads—and it was his job to make sure it got removed.

Since starting as the director of Lansing’s Public Works Department on January 7, a position that has been vacant for over two years, Richardson has already dealt with large snowfalls and the coldest days in recent memory.

On January 31 he was attending a public works conference in Schaumburg but had to return to Lansing due to three water main bursts—a result of subzero temperatures. His employees greeted him skeptically as he arrived on scene in his dress shoes and slacks.

Richardson is no stranger to the unique challenges of public works. Growing up in Mount Vernon, New York, he got his first public works job at age 14 during his summer vacation. After graduating, he continued to work for the city maintaining athletic facilities, grounds, and buildings.

“I started working on the trash and in the parks and different things in the summer, and as I got older I ‘graduated to the truck,’ as they would say in the public works field,” Richardson said.

Richardson worked at Fordham University in New York and a fleet service before moving to Illinois in 2004 to become the facility specialist for Elmhurst Park District. For the last three years, Richardson has been the Public Works Director for the Village of University Park.

“It’s been my whole life,” Richardson said of his public works background, “I remember being 16 or 17 years old and one of my big summer jobs was painting fire hydrants.”

Having done the work himself, Richardson knows how to best help his employees. When the snowplows are out in Lansing, you might see him driving around the village, checking in to make sure everything is going smoothly. “I don’t believe in having [my employees] out here all night long while I’m sitting at home. If they’re coming in, I’m coming in,” he said, “I want my guys to know that when it’s ‘all hands on deck,’ I have a pair of boots here in my office with some jeans and overalls.”

As the director of the department, Richardson deals with the Village administration and other departments such as fire and police, which he says, along with Public Works, make up the “big three of emergency management.” Of his experience with village staff so far, he said, “It’s going very well. The people here in Lansing have been very receptive, and I’m just impressed with the professionalism between the department heads here in the Village.”

In addition to addressing the department’s everyday business, Richardson hopes to educate Lansing residents to bring a better understanding of what Public Works is and does. “That’s a part of having the Public Works Department being accessible to the residents, so they can understand,” he said.

As a newcomer to Lansing, Richardson has already asked many of the questions that he thinks Lansing residents might be asking. For example, he questioned why large roads like Torrence Avenue, Burnham Avenue, and 170th Street were not being cleared of snow immediately, only to learn that these roads are county roads and the responsibility of the Illinois Department of Transportation.

Richardson hopes to tackle potholes and tree maintenance projects when the weather improves, but he also wants Lansing residents to contact Public Works about other potential projects. “We’re here for our residents,” he said, “we can’t make everybody happy, but one of the goals I preach here is that our residents come first…and we should do whatever we can for the residents of Lansing to make things better for them.”

Though the weather is often changing in Lansing, and every day in the Lansing Public Works Department brings something new, Richardson plans to be ready for it. “Whatever I do, I always try to do my best,” he said of the job, “I’m in this for the long haul.”

For more information on the department, visit www.villageoflansing.org.