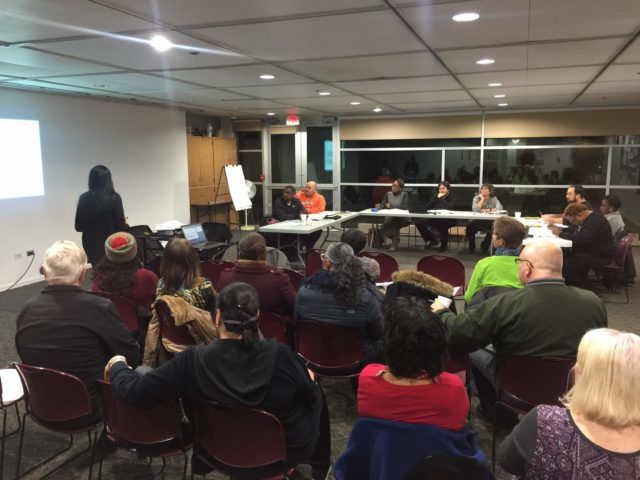 LANSING, Ill. (January 25, 2019) – “You guys can get together,” Attorney Erin Blake told the Human Relations Commission at their first business meeting, December 20, 2018. Blake was providing some training about the Open Meetings Act, and she was specifically responding to concerns expressed by some of the Commissioners. Most of them did not know each other prior to being appointed to the HRC, and they wanted to build relationships in order to work effectively as a team, but they felt constricted by the requirements of the Open Meetings Act (OMA).

Blake assured them that they would be able to get together without violating the OMA, and her presentation helped them understand the purpose of the OMA as well as how and when its requirements are triggered.

What the OMA is

The Illinois Open Meetings Act (OMA) was enacted to ensure that members of the public have access to information about their government and its decision-making process. The Act makes all meetings of government bodies open to the public, and it requires that the public be given notice when such meetings will take place.

What a meeting is

Blake began by defining a meeting as “any gathering of a majority of a quorum for the purpose of conducting public business,” and she highlighted the three main components of that definition:

Because the Human Relations Commission consists of nine Commissioners, a quorum equals five, and a majority of the quorum would be three. Therefore, any time three Commissioners are present in a physical space or via electronic means (email, video conferencing, group chat, etc.), they can be considered “gathering.”

Gathering is allowed as long as no public business is conducted. So, for example, if four Human Relations Commissioners decide to have lunch together and learn about each other’s families, there is no violation of the Open Meetings Act. If, however, they discuss ways to build community in Lansing and decide to set up an HRC Facebook page, that is a violation—they have conducted public business without informing the public ahead of time.

As Lansing’s local election draws near, the members of the Village Voice Party, Lansing’s only political party, are holding private meetings in preparation for the election. Of Lansing’s six current Trustees, four are members of the party. Given that the party’s campaign will address issues relevant to Lansing, the party must take special care to not violate the Open Meetings Act by discussing Trustee business.

At the January 23 Village Voice Party press conference, Trustee hopeful Saad Abbasy made a distinction between “campaign business” and “public business,” saying, “[When the party meets], we’re talking about our ideas that we’d like to see implemented—fresh ideas.” Abbasy and the other Village Voice Party candidates have given assurances that no public business is being discussed during party meetings.

The Illinois Open Meetings Act makes no mention of political campaigns or elections.

All meetings of public bodies are subject to the OMA. The OMA defines a public body as “all legislative, executive, administrative or advisory bodies of the State, counties, townships, cities, villages, incorporated towns, school districts and all other municipal corporations, boards, bureaus, committees or commissions of this State, and any subsidiary bodies of any of the foregoing including but not limited to committees and subcommittees which are supported in whole or in part by tax revenue, or which expend tax revenue, except the General Assembly and committees or commissions thereof.” In Lansing, public bodies include:

Meetings of any of these public bodies are open to the public and must be announced ahead of time. Whenever a majority of a quorum of any of these bodies has gathered without notifying the public, no public business shall be conducted.