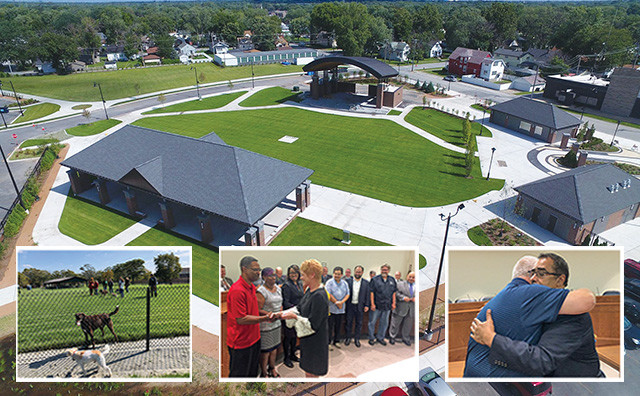 All those articles were “Lansing news” —they were stories that happened in Lansing, or they involved Lansing people, or they were township, state, or national stories that had a local impact or interest.

Although news by nature is “what’s happening now,” in recording it—in print and online—we create an account of Lansing’s history. And the beginning of a new year provides an opportunity to review that history in order to move forward more purposefully.

In virtually every category of news—Sports and Recreation, Arts and Entertainment, Business, Education, Environment, Health, and more—Lansing accomplished something new in 2018. Some firsts were very public, such as the opening of Fox Pointe. Others were greeted with less fanfare, such as the Lansing Public Library going fine-free. All told, there were more than 50 “firsts” in Lansing this past year. A few are highlighted here:

For the first time in Lansing—

Dogs and their owners have their own place to play

“This has been a dream for a couple of years,” said Park Board Commissioner John Kelly at the ribbon-cutting party for Paws ‘n Play dog park. “It was number one on the wish list for the community. So we heard the community, and we acted on it.” The dog park officially opened in September, and the October ribbon-cutting gave residents, government officials, and local businesses an opportunity to express support for the new venture. The event included a K9 demonstration by the Lansing Police Department, dog and owner caricatures by artist Bill Jackson, a visit from the Ted’s Feed Store mascot, and giveaways from local businesses. The park district provided a hot dog lunch to attendees. Paws ‘n Play Dog Park is located in Bock Park, along Chicago Avenue.

A Human Relations Commission has been appointed

For the first time in 21 years, Lansing formed a new Commission—and it’s a Commission with a unique assignment. The Human Relations Commission has been tasked with helping Lansing develop a culture that embraces diversity, promotes inclusion, inspires involvement, and develops civic pride among all Lansing residents. Dozens of people applied for the role, and Mayor Patty Eidam selected 15 applicants to interview. Of those, she chose 9, and the Board approved them unanimously on September 18. Lansing’s first Human Relations Commission had a training meeting in November, and they conducted their first meeting of business on December 20, 2018. They will be meeting on the third Thursday of each month, and the public is welcome to attend.

A Memorandum of Understanding was signed

After months of meetings guided by a federal mediator, members of the community, the Village administration, and the Lansing Police Department met to sign a Memorandum of Understanding outlining a new relationship following a 2017 incident that involved a white off-duty police officer and a black teenager. The process was often frustrating, and the journey is not over, but the signing marked a new sense of partnership and commitment to a healthier future. “It was a negative event,” said Police Chief Dennis Murrin, “but it’s having a positive outcome.”

Fox Pointe is perhaps the biggest step in transforming Lansing into a destination, a place people will make plans to visit. Autumn Fest 2018 was the first event in the new venue, and in spite of miserable weather throughout the weekend, record crowds enjoyed the food, entertainment, programs, and kids activities. In addition, having a hometown event as the first to experience the facilities, amenities, and logistics gave Village representatives a way to test drive the venue with an actual, large, multi-day event and still get valuable feedback. “I am so incredibly proud of my community for creating such a beautiful space,” said one Autumn Fest attendee. “I enjoyed Autumn Fest, and I look forward to the next event.”

Other Lansing firsts (by month)—

The list below does not include everything that could have been considered a first-time occurrence in Lansing, but a representative sampling is included from each month of 2018. Each item is a link to the full story about that event.

Related:
For more perspective on 2018, check out the 2018 Highlights stories by Lansing Journal writers—