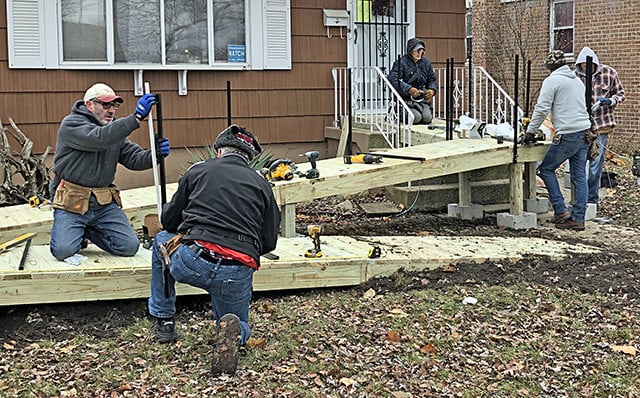 LANSING, Ill. (January 4, 2019) – The whine of a circular saw accompanied the friendly chatter of seven men in the “Cadet room” at Bethel Church on December 27, 2018. They had planned to work onsite, outdoors, that day, but rain convinced them to accomplish as much as they could inside. Amid the stacks of 2x6s, cases of drill bits, and cups of coffee, they assembled sections of a wheelchair ramp that would be installed at a Lansing resident’s house so she could return home after rehab at Hartsfield Village.

Arie Van Ek organized the crew from Bethel when Trustee Jerry Zeldenrust let him know about the situation. Zeldenrust’s volunteer group, Love for Lansing, had been responding to similar needs in the community since the summer of 2017, but they were unable to take on this project. Because of the impending release from rehab, the ramp needed to be constructed quickly.

Van Ek was eager to help. A former Illiana teacher with a variety of handyman skills, he has frequently teamed up with others at Bethel to respond to needs in a way that isn’t patronizing and has no ulterior religious motives. For the past several years, Bethel has partnered with a growing church in a Gary neighborhood, learning a lot about relationships along the way. Now Van Ek and Bethel would like to bring their building skills—and relationship-building skills—home to Lansing as well.

This is good news for Zeldenrust, who would love to increase the number of Lansing residents his Love for Lansing volunteers can serve. “The more the word gets out [about this service], the greater the number of requests for help come in,” he said in an email. “The last half of 2018 was very busy.” Zeldenrust works with various Village contacts and departments to become aware of needs, and his team of volunteers can choose the projects that meet their skill sets. Projects have involved yard work, carpentry, tree trimming, small repairs, and clean-up.

Zeldenrust emphasizes that though his church (First Church PCA) originally started the Love for Lansing volunteer program, it is open to anyone. “It would be great if other churches and civic groups got involved,” he said, “so that no one in need in our town would be turned away.”

Bethel’s “dream team” of volunteers for the ramp project was not composed entirely of professional tradesmen, but even the former banker, former teachers, and former home inspector have enough practical experience to do quality work. “These guys are the best,” said Van Ek, appreciating that they work with their hearts as well as their hands.

The next day, bitter cold replaced the rain, and the team brought the five ramp sections and two landing sections to the site for installation. They were joined by Shaun Buikema, who has been a Bethel liaison in Gary for the past few years and now has joined the Bethel staff in Lansing.

Buikema too enjoys building and fixing things, but he also enjoys people. The actual ramp was completed in a matter of hours, but the relationship-building is ongoing. As a first step, Buikema reached out to the woman’s family and asked if it would be okay for him to visit her at Hartsfield. “I mean, wow,” said Steve Adams, the woman’s only son. “What a great guy! That’s just really nice.” Knowing there is a community surrounding his mom helps ease the stress of navigating healthcare challenges.

The woman is eager to return home—her house in Lansing was built in 1959 by her husband, who died in 2002. They had rented several different Lansing locations when they were first married, but this is the only house they ever owned. Her son understands her eagerness, but he wants to be sure she’s strong enough to stay home once she gets home.

When he heard the work was completed, Adams stopped by the house and took pictures of the ramp. He’ll bring them to Hartsfield next time he visits and show his mom how beautifully her community has cared for her. Adams was very impressed with the workmanship—and amazed at how quickly Van Ek and his fellow volunteers were able to respond to his family’s need. Her rehab may take longer than she wants, but her home will be wheelchair accessible whenever she is able to return.

“I’m glad my parents chose Lansing when they were ready to settle somewhere,” said Adams, who has fond memories of growing up here and remains impressed with the small-town values. “It’s really a great community.”

People who are interested in volunteering with Love for Lansing on future projects are invited to contact Jerry Zeldenrust via email or First Church PCA via phone:

First Church PCA is located at 3134 Ridge Road in Lansing.

And Buikema says that people who are interested in joining Bethel work teams on future projects around town are “more than welcome” to call the church office and ask to speak with him:

Bethel Church is located at 3500 Glenwood-Lansing Road in Lansing.